You are here: Home / Books To Read / A Pimby Tale by Robert Pardi 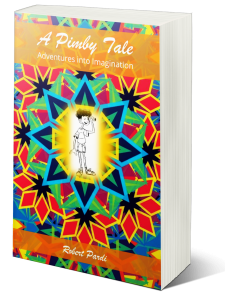 About A Pimby Tale by Robert Pardi:

This modern-day fable is for everyone. It is for those who want to grow and transform by losing themselves in wonder and curiosity. It is for anyone who wants to reconnect to their childlike enthusiasm and escape to the wondrous land of imagination that is full of purposeful lessons.

A child’s world is one of curiosity, optimism, wonder, creativity and unreserved enthusiasm. A world where there are no ordinary moments. Where each moment is infused with uninhibited joy, playfulness, and living wholeheartedly.

Yet, all too often we adopt a mindset of responsibilities, obligations, and behaviors we equate with being “an adult”. Life then becomes less fun and more of a struggle, and a never-ending to-do list. In turn, that precious connection to our inner child who once had big dreams and joy is severed.

The story of Johnny and Filbert is one of awakening. It is a journey into the land of imagination and possibility. Filbert, a magical being called a PIMBY, stretches Johnny to see things differently by broadening his perspective and questioning beliefs, which many times are limiting.

The reader is asked to never again lose sight of Possibilities, Imagination, Magic, Believing, and You – because YOU are beautifully unique.

Robert is one of those rare individuals who embraces change and lives by a philosophy which he calls “possibility in action”. Born in NYC, Robert has also lived in Abu Dhabi, Dubai, Rome and now lives in Abruzzo. He received his MBA from Columbia University and was quickly recruited by one of the world’s largest sovereign wealth funds, the Abu Dhabi Investment Authority in 1997. It was shortly after accepting the position that he and his wife were confronted with an extreme life event that shook the very foundation of all their hopes and dreams. Desiree, his wife, was diagnosed with late breast cancer right.
Unfortunately, she succumbed to metastatic breast cancer 11 years after her diagnosis. Following her death, Robert re-assessed his life and decided to share the many lessons he learned by becoming a Certified Life Coach, Keynote Speaker and most recently Author. He has addressed key groups at institutions such as Columbia Presbyterian Weill Cornell, Memorial Sloan Kettering, Stony Brook University, and Leslie’s Week, as well as at the prestigious The Alexander Ming Fisher Memorial Lecture.
In addition, he pursued a childhood dream to live in Italy and now lives in the same small Italian village his great grandfather immigrated from. Robert is the Author of Chasing Life – The remarkable true story of love, joy, and achievement against all odds, and Possibility in Action.