You are here: Home / Books To Read / A Lady Newspaperman’s Dilemma by Eileen Joyce Donovan 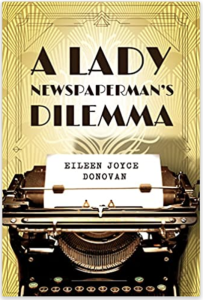 About A Lady Newspaperman’s Dilemma by Eileen Joyce Donovan:

Based on actual events, this story is set in a newspaper office in Eastern Montana in 1926. A time when the American public was obsessed with newspaper horror stories of what most today would consider ordinary murders or other man-made catastrophes. Anything that could contribute to the roar of the Roaring 20’s was commercialized, became sensational news overnight, and newspaper fodder for many days thereafter. Hence, a flood that could destroy a town became a front-page event. More than anything, Alex wants to be a journalist for a major metropolitan newspaper. a field dominated by men. Harriet Quimby and Nellie Bly notwithstanding. Although she’s covered other front-page stories, including a murder of a much loved and respected rancher, this flood will affect everyone living in Sunset Valley, if they survive. When this life changing story falls into her lap, her editor threatens to assign it to a more seasoned male reporter, or maybe cover it himself. Alex becomes frustrated at being cast aside and is determined to hold on to her right to cover the breaking news. Her story will ring true to all women who have been passed over in favor of a male associate, those who didn’t give in and broke through the glass ceiling and inspire women who are just getting their feet wet in their careers.

Although born in New York City, where she spent most of her life, Eileen Joyce Donovan has lived in six states and visited most of the others. She earned her MA in English at Northern Arizona University. In one way or another, she’s been writing her entire life, whether it was imaginative stories for friends, or advertising copy for industrial clients.
But she never felt her stories were “good enough” to be published. At the persistent urging of her husband, she finally agreed to seriously edit and revise one of them and take the plunge. Although accepted for publication, the book never made it all the way to print. However, this gave her the courage to pursue her dream of becoming a published author.
Years later, her persistence paid off and her debut historical fiction, Promises, won the 2019 Marie M Irvine Award for Literary Excellence. A Lady Newspaperman’s Dilemma won the 2021 When Words Count nationwide competition. Her short stories have appeared in various anthologies, including the 2021 Chicken Soup for the Soul, Blessings of Christmas.
She lives in Manhattan, New York and is a member of Authors Guild, Women’s National Book Association, Women Fiction Writers Association, and The Historical Novel Society.