You are here: Home / Books To Read / A Korean War Odyssey 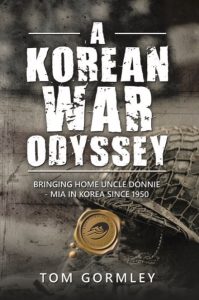 About A Korean War Odyssey:

A Korean War Odyssey tells the true story of Cpl. Donald Matney – his exploits and sudden disappearance during the war, and our efforts to locate and bring him home many years later. A small-town Missouri boy, Donnie joins the army at the age of 17 to see the world during peace time and is posted to the good life performing occupational duties in Japan. When the North Koreans attack, he is suddenly thrust into violent combat fighting a better armed and better prepared enemy. A mortarman who never fired a live round, he finds himself lobbing shells at the enemy across the Kum River. He disappears during the battle for Taejon. Over sixty years later, we set out to retrace his journeys and possibly bring him home. Our efforts take us to Washington, DC, Korea and many places in between. But slowly, carefully we reconstruct the short life of Donald Matney and bring him home to be buried by his mother. A Korean War Odyssey tells the story of the forgotten war from a participant’s perspective and adds the twist of a family who didn’t give up the search for their missing loved one.

Author Bio:
Born in northeastern Ohio, Tom grew up tossing newspapers, mowing the cemetery and camping with his family in a tent trailer. Tooting a sax, banging on a bass drum and running student council scared the principal enough to allow Tom to graduate from high school. He then migrated to Columbus to attend The Ohio State University where he ran student government while completing his B.S. in Industrial and Systems Engineering.
Skiing, open spaces and a disk drive manufacturer brought him to Colorado. He met his wife there, which changed his passion from flying airplanes to tent camping, buying houses and raising their daughter while completing his MBA from Colorado State. But he always retained his love for history and researching what really happened way back when. Thirty some odd years later, he is ready to give up the corporate grind to spend more time with his wife and two grandkids and traveling in their motorhome.