You are here: Home / Books To Read / A Distance from Avalon: When the Dying and the Dead Reunite 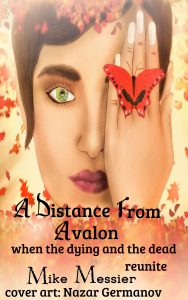 About A Distance from Avalon: When the Dying and the Dead Reunite:

Avalon is a place you don’t want to be in.
Or maybe you do.

A Distance from Avalon: when the dying and the dead reunite follows Joe Humble, a middle school history teacher and a father of three, in the middle of a painful divorce, as he finds himself in a new world.

Joe is led into a spontaneous Halloween night adventure by co-worker Shadow, a music teacher, who has survived her own troublesome mother to become an accomplished and well-liked young professional. Joe finds himself at a Castle with the door opened by Shadow’s “friend of a friend”, the alluring yet stoic Heartbreak, who in turn takes us to the master of the house, the mysterious, charming, and gothic Jean La Croix Distance.

While the ladies seem to find a common ground, the two gentlemen can’t help but challenge each other’s wit, intelligence, and world knowledge. Eventually, wine and conversation cool their tempers.

After a marvelous meal, an indecent proposal of a “no guarantees, no strings attached” partner swap for the rest of the evening leads the two mix-matched couples to share feelings of profound empathy and even spoils of the flesh that are later revealed to be mere tools for manipulation and indoctrination.

Would it be too much to share that there is more to our hosts than what at first seems?

Ultimately, Joe must choose whether to make this odd yet fascinating place his new home or to somehow find a Distance from Avalon.

To enjoy a short video performance of a monologue adapted from this novel performed by the author, copy and paste to the link: https://mikemessier.com/2022/04/28/mike-messier-wins-best-actor/

Because Joe Humble
appears as just another average Joe with a chip on his shoulder, if we even notice the chip,
we may not choose to notice Joe himself.

And that would be our mistake.

Because this Joe, our very average Joe, has tapped into something, a crinkle in our understanding of time, the nature of time, and the possibilities of how we think and how we make choices that affect ourselves, others, and all of humanity.

Joe average is a very important person after all.
Joe Humble is our hero in crises.

As an Actor, Mike has shared scenes with Meryl Streep & Elisabeth Shue in Hope Springs, Mario Van Peebles, Wesley Snipes & Cybill Shepherd (as her son) in Hard Luck, and Frances McDormand & Richard Jenkins in Olive Kitteridge among others. Recently, Mike has co-starred as Hank in Mr. Birthday starring Eric Roberts, and Delanty in The Mick and The Trick.

Much of Mike’s own short films, celebrity interviews, and other videos can be enjoyed for free on “Subscribe to Mike Messier YouTube Channel” (yes, that’s the name of the channel).

Having made his own movies since high school, Mike is a 49 Award-winning producer, screenwriter, Director, TV host, and actor, most recently winning Acting Awards from The Alternative Film Festival and the Toronto’s Couch Film Festival.

Early in his Acting career, Mike traveled to LA for an audition for an HBO series produced by Jay Roach (Director of Austin Powers and Meet the Parents) and R.J. Cutler (Producer of The War Room). That story is chronicled in Re:jected by Reality, a documentary Mike produced about his various experiences in the reality TV trend which eventually received a rave review from Film Threat a hipster film website that also praised Mike’s animated Schtick Man.

Mike’s filmmaking accolades include two screenwriting awards for Fight or Play Basketball, three awards for his short films So, You’re the Guy?, Thanksgiving and Breakfast with Kurt from Nassau Film Festival, and a Regional Associated Press Award and a Regional Emmy nomination as an Associate Producer on Haiti: Triumph, Sorrow and the Struggle of a People.

In 2016, Mike co-wrote and co-starred in the Lionsgate-distributed horror film The Manor (aka Anders Manor). In the film, Mike plays roughneck hunter Ole Bayton with brothers Brett and Darsaw played by Sully Erna (singer of Godsmack) and Pro Wrestler Mike Bennett Kanellis. In The Manor, Mike has an intense scene with Kevin Nash (former WWF & WCW Champion) and Christina Robinson (Dexter). A few years later, Mike worked as a script consultant, providing a good portion for the voice-overs read by Dr. Dre, on Lennox Lewis: The Untold Story.

In 2017 and 2018, Mike reconnected with the world of theater with the Boston-based Play in a Day Festival as a contributing Writer/Director/Host as well as BarStool Stories guerrilla theater out of Boston.

One of Mike’s short plays, Who’s Your Daddy?, was later produced and staged by The Orange Players of CT, from information Mike obtained from Play Submissions Helper, a website Mike now works with and that he recommends to all playwrights, with the promo code MIKE giving new users their first month for only 99 cents.

Messier Peace Theater – a behind-the-scenes look at the creation of a short film titled That Night – recently won Best Web-Series/New Media Short from the Alternative Film Festival and can be found on Subscribe to Mike Messier YouTube Channel. Mike also recently won the Super Short Category, also in the Best Web-Series/New Media division, from the same festival for his Life Lessons learned from Michael Jordan’s The Last Dance.

During the last few years of “social distancing”, Mike has put most of his creative energies into his writing but promises to re-emerge as an actor again soon.

Towards that end, Mike performed as Jean La Croix Distance himself in Seduction of Distance, a proof-of-concept video for the screenplay version of A Distance from Avalon, that can also be found on the aforementioned Subscribe to Mike Messier YouTube Channel.