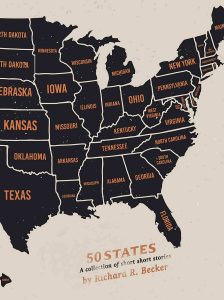 An Idaho farmer who aches for absolution after a tragedy is given one more chance at redemption. Two runaways cross paths in a Tennessee bus station with only one ticket between them. A family sees looters racing toward their home as they escape an Oregon wildfire. A young couple takes a reckless turn off a state highway in Utah and find themselves in a nightmarish government biohazard area.

These and 46 more shorts make up an anthology that will surprise readers with each new thought-provoking story as they skip across different genres, moods, and states of mind. Together, they provide a character-driven sampling of the American experience over the last 60 years — the kind and the cruel, the heroic and criminal — in unpredictable and suspenseful ways.

50 States is a debut collection of short stories that captures the human condition. The book spans several literary genres with each short story set in a different state.

Richard R. Becker is an award-winning American writer. His debut collection of literary fiction and psychological thrillers began as a project to write one story a week for 50 weeks. It became a top 100 literary short stories bestseller in January 2022.

As a journalist, Richard has written hundreds of magazine and newspaper articles, with his byline appearing in the Denver Post, Los Angeles Times, and publications for Simon & Schuster and Paramount Communications. He also scripted a documentary produced with PBS and contributed to five books related to marketing, public relations, and management.

He currently serves as president of Copywrite, Ink. and, for 20 years, previously taught at the University of Nevada, Las Vegas. In addition, Richard currently serves as a city council-appointed volunteer commissioner on the Las Vegas Parks and Recreation Advisory Commission. He has assisted more than 60 nonprofit and professional organizations as a consultant and board member during his career and has been featured as a speaker for a variety of organizations, including Wizard World Comic Con, G2E World Gaming Expo, National Recreation and Park Association, Regis University, and U.S. Small Business Administration.

Aside from writing, Richard has a broad range of interests, including travel, hiking, parks, fitness, illustration, photography, and spending time with family. He is married and has two children.