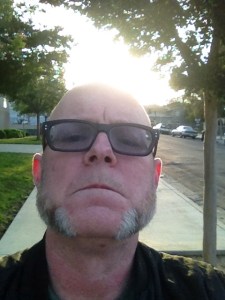 Tell us a little about yourself. Where were you raised? Where do you live now?
I was born and raised in Houston, Texas, which I ended up choosing as the setting for my first novella, The Villain’s Sidekick, even though I haven’t lived there in years. I left Texas after college and settled for a good long while in San Francisco, where I landed my first paid writing gig after many years working below my abilities in restaurants and cafes and the like. Once bitten, I couldn’t go back to those day jobs, so my girlfriend (now wife) and I relocated to Los Angeles a few years back. We now have a pretty amazing son and two wonderful, tragically aging dogs, a neurotic Lab mix and a pit bull/boxer.

At what age did you realize your fascination with books? When did you start writing?
I was born to two voracious readers, so the love of reading was instilled from about as early as I can remember. I actually had a little difficulty learning to read but once I got it, I took to it like a Great White shark to a helpless sea lion, and within very short order I was bored with kiddie lit and moving on to grown-up books. I remember reading “Jaws” when I was 8 years old (hence the shark reference) after being so enthralled by the movie. So, fittingly enough, when I started writing, my first book was entitled “Jaws,” and involved a shark who could walk on land (SNL had just started airing around that time, too, so dual influences at work). I wrote a lot of derivative stuff until I found my own “voice.” Which is really probably just a mash-up of all the authors and stories I’ve encountered and loved ever since.

Who are your favorite authors to read? What is your favorite genre to read. Who Inspires you in your writings?
My favorite genres are science fiction (Philip K. Dick, William Gibson, John Brunner, Ramez Naam), crime fiction (James Ellroy, Jim Thompson, Charles Willeford, Elmore Leonard), and the literature of the dissolute (Bukowski, Hunter S. Thompson, Don Delillo). They’ve all equally inspired what I do now. But the biggest influence over the last few years–and at my age maybe I should be embarrassed to admit this but I’m so not–has been a rekindled love of comics, from weird indies to straight up mainstream superhero fare. I’d read them off and on since adolescence, but when a friend introduced me to Sleeper by Ed Brubaker, and I went on to read his Captain America stuff, I became more immersed than I’d ever been. In fact, I’d been kind of stuck on a science fiction story I was telling and it was only when I got the inspiration that I could include superpowered characters and take it to a more interesting, liberating place. Since then, I’ve read a LOT of superhero prose fiction–basically comic books without the pictures, I guess, but so much more, too–like Austin Grossman’s “Soon I Will Be Invincible,” Jim Bernheimer’s “Confessions of a D-List Supervillain, Rafael Chandler’s “The Astounding Antagonists,” Blake Northcott’s “Arena Mode” series and on and on. It’s really a whole terrific genre just waiting to be discovered by the mainstream. And with the current popularity of superheroes in film, it seems just a matter of when.

Tell us a little about your latest book?
I’ve written two novellas featuring my alter-ego, Duke “HandCannon” LaRue, a supervillain’s henchman with a machine gun arm, a steel jaw, an ex-wife who used to do crimes with him before the birth of their adorable precocious daughter, and all the troubles that go with being a semi-reformed bad guy in a 12-step program who may be harboring a hero beneath his frightening exterior. He’s basically the distillation of all that Bukowski, Jim Thompson and William Gibson I mentioned up top. There’s The Villain’s Sidekick and it’s short prequel, The Eternity Conundrum, and I’m currently working on a full-length sequel, Citizen Skin. The sequel alternates POVs from chapter to chapter between HandCannon and his badass best friend Trista Brooks, also known as Nightguard. She’s a supporting character in Villain’s who steps large on the stage in the follow up.