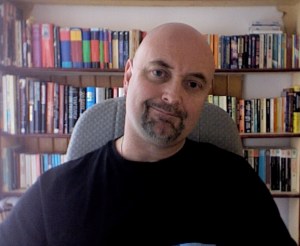 Tell us a little about yourself. Where were you raised? Where do you live now?
I’m originally from the UK and am now based in Calgary in Western Canada. I’m an author of science fiction and fantasy novels for children and young adults, including The Alchemist’s Portrait, The Sorcerer’s Letterbox, The Clone Conspiracy, The Emerald Curse, The Heretic’s Tomb, The Doomsday Mask, The Time Camera, The Sphere of Septimus, and Flashback. I’m also the author of The Children’s Writer’s Guide, The Working Writer’s Guide, The Social Media Writer’s Guide, and many non-fiction books.

I offer a wide variety of presentations, workshops and author in residence programs for schools and libraries, covering such topics as the writing process, editing and revision, where ideas come from and how writers turn them into stories, character development, historical fiction and historical research, story structure, the publishing world and more. I’m an instructor for adults with the University of Calgary and Mount Royal University and offers a variety of online workshops for both children and adults. I also offer a number of services for writers, including manuscript evaluation, editing, writing workshops and coaching, plus copywriting services for the business community.

At what age did you realize your fascination with books? When did you start writing?
I don’t recall the exact age but it was quite early in childhood. I read a lot of science fiction novels and collections of short stories while growing up, as well C S Lewis, Tolkien, other fantasy writers and ghost stories. I also read a tremendous number of comic books as a child, which were great for the imagination. At high school, I studied a great deal of history and have retained my interest in the subject up to the present day. I also read voraciously on ancient civilizations, mysteries, the supernatural, and the unexplained.

I did some writing back then but never contemplated writing as a career. This came later and I began to have ideas for novels for children and teens once I became a parent. I’m not an illustrator and couldn’t create picture books for the youngest readers so devised stories in my favorite genres for readers aged nine to fourteen. These were usually the types of stories that I’d have enjoyed myself at that age, largely, but not entirely, influenced by what I was reading and watching back then.

When I began my career as a writer I was influenced by the earlier books in the Harry Potter series. However, I didn’t want to write about wizards, dragons, or magic, but rather about the things that I was interested in, such as time travel, the paranormal, superheroes, ancient mysteries, or history. I was also influenced by Phillip Pullman’s The Golden Compass, The Subtle Knife, and The Amber Spyglass, along with some other excellent fantasy and science fiction works.

Tell us a little about your latest book?
My latest novel is Flashback, which was published in 2015. It’s a paranormal mystery adventure for young adults involving psychics, ghosts, and mind control experiments. With regards to the inspiration for the novel, this is another of my favorite themes in the science fiction and fantasy genre. The initial idea was one of the first that I had when I began my writing career but the novel took a while to develop to my satisfaction.

In Flashback, Max, a fourteen-year old boy, experiences strange dreams and visions, which appear to be from someone else’s life. He also sees a ghost and fears that he might be losing his mind. However, following an encounter with elderly private detective John Carrington, Max learns of government conspiracies, secret kidnappings, and mind control experiments conducted by a rogue scientist and his psychic accomplice.