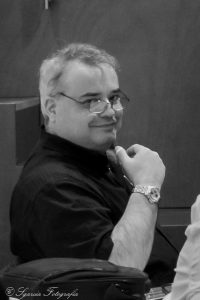 Tell us a little about yourself. Where were you raised? Where do you live now?
I was born in Buenos Aires, in the neighborhood of Núñez, on street Manuela Pedraza. There I spent my childhood until age 10, when we had to move to my father died. I made the elementary school: Juan Andrés Gelly Obes, made a double shift. I also did high school at the Carlos Pellegrini Institute, located in Pilar. I studied music, guitar and piano, but found I had no talent for it, and that what interested me was writing songs, but really what drove me was to write itself. A child always influences people and their personality. His relationship with his parents, the environment, neighborhood, education, always involved in their future, their vocation, even your destination. One of the greatest experiences was touring Argentina backpacking with some friends. There I learned the values of the people, and the possibility of being at the mercy of climate, living without money or even the solidarity of the people. We created with a group of fellow students a literary group during the period of the dictatorship, and we published a mimeographed some stories and poems; but only we get the first number, then they censured us and took away the mimeograph. The group continued in several stages, while working in economics, then a municipal library and finally on social networks. It was an experience that did the job and reached the end of its life cycle. Then I started teaching staff and the way of teaching. All experiences are a summation of emotions and reflections tuning us and manifest itself in what we do. And of course the economy will influence the welfare of a child and the development of their concerns. I live in Europe eleven years ago; I lived in Italy and am now in Spain, where I finished my doctoral studies at the Complutense University of Madrid. The cultural variety is relevant to those who believe, change the rigid view of certain values, or learn new ways. Adaptation to the environment, observation of different cultures, including food, enriches and expands our overview increasing our understanding. No, I don’t have pets. The animals have to live in freedom.

At what age did you realize your fascination with books? When did you start writing?
I am an avid reader. I read the classics in my teens, and I always had three or four books on my shelf that I read at times. A book is a very powerful tool; a person who has read is a polished, educated and modifies its behavior in society. It is therefore important to read and understand what you read, and do analysis of what is read. A book can change moods, and it is very dangerous not read because the word means uncultivated uncultured, is as barren land, which does not give outbreaks. The books will change format or form, but never disappear. Begin writing was intuitive to learn music because then I began to sketch out songs, but in my head already circulating philosophical, literary or reflective concepts. At 15, I wrote an essay about human evolution and at 18 he had already written some songs. Learn literature helped me to develop some poems that added to the experience of love were leaving me the inspiration for my first book halo “Versos Encamotados” I published in 1990 in the Filofalsía publishing, and today is on its 3rd. Edition. Just as reading, writing is an internal manifestation, Borges said: “a writer is primarily a reader.” The need to say something, to convey a message, to express an emotion, or as Joseph Brodsky said. “… Leave a footprint on the earth”.

Who are your favorite authors to read? What is your favorite genre to read. Who Inspires you in your writings?
I have read many authors and each and each have left their message, some literary sequel, and learning. Franz Kafka considers the best storyteller, with fantastic mix of ontology; Ray Bradbury Science fiction is imagination; Lovecraft terror is very influential; although Poe is also upstairs. In existential poetry, Whitman is a great author; Romantic poetry as Shakespeare is the most imitated; Bécquer also is important. Gibran is an ontological author, and social poetry Rafael Alberti and González Tuñón marked difference in their prose would answer. Without neglecting to Dostoyevski or Chéjov, or Rumi and Ítalo Calvino. There are also new authors, unknown, unread, and many works never edited. I think you have to read everything you can at least know that there are cased or works not widespread. It is amazing to think that there are countries in the world banning books in this era of communications and social networking. That explained in the book “Comunicación and Censura”, where I express the reasons for censorship, causes and consequences. Therefore all reading will be helpful, leave their mark and tell us something that the author has tried to demonstrate.

Tell us a little about your latest book?
I have two closest to publish books: “Coaching Educativo” and “La sutileza de la luz”. Although I have always educational nature books to publish. Educational Coaching is a book that is essentially about educational processes currently applied in places where education is no longer using Taylorist methods, where there is taught by rote, repeating like a parrot, but, as taught Robert Gagné in his table learning- learning to think from a scientific conceptualization. Survivals in this time of Homo sapiens depend heavily on general education on the planet. That they are still used archaic systems, the era of mass communication, when the idea of a single man or leader was imposed without further ado. And human evolution will depend on the overall change in educational processes. Remember there was a time-not long ago-that primary education did not exist, and only learned by generational transmission, from parents to children. The subtlety of light prose a book that talks about human knowledge, existentialist, scientific, and grounds for the presence of man in the universe is. It is a collection of poems and short reflections, which point to an objective direction where man’s search to a single evolutionary destiny is its philosopher’s stone. There will be other books to disclose and written to keep doing, creating and publishing. Thank you for the interview.