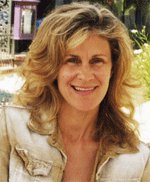 Featured Interview With Key of Mystery, book I in the NIGHT ANGELS CHRONICLES, by K. H. Mezek

Tell us a little about yourself. Where were you raised? Where do you live now?
First, my name is Karen Hunt but I write my YA books under the name KH Mezek. I was born in Los Angeles. When I was ten years old my dad believed that God was calling him to stop being a businessman and become a writer. I was ten years old at the time and it was the turbulent 1960s. My dad packed up our family of six and we started traveling the world so he could gain inspiration for his books. We had some pretty wild adventures, such as escaping out of Egypt right before the 6-Day War and living in a 17th century castle in Switzerland. My dad went on to become a successful author and he greatly inspired me, although I never agreed with his narrow religious views. I have a childhood memoir I’ve just about finished, called Into the World, an excerpt of which just won the 2015 New Millennium Writings Nonfiction Award. As an adult, I lived between London and a little village in Slovenia. I just returned from one month in the Sahara Desert in Morocco, where I was doing a fantastic program I created called My World Project, connecting young people around the world through art and writing. I happily live out of a suitcase and travel anywhere, but I am based back in Los Angeles now. I don’t have a pet, due to all my traveling but I do have three grown children and two grandkids and they keep me busy! My greatest passion besides writing, reading and traveling, is teaching boxing and kickboxing. I am a second degree black belt in Tang Soo Do and have trained extensively in Eskrima and Okinawan weapons and boxing and kickboxing.

At what age did you realize your fascination with books? When did you start writing?
Since the first moment I laid eyes on a book I have loved to read. And I have always loved to write and draw. My sister and I wrote stories together as children. When we lived in the castle we made up all sorts of scary stories. I had a pretty wild imagination and that castle, with its winding staircase, turrets and dungeons, brought it all out! When I grew up and had my children, I was inspired to write and illustrate children’s books. I illustrated four of the first multi-cultural books to be published in Great Britain. And when I returned to the United States, I went on to have fifteen more children’s books published, among them the best-selling The Rumpoles and The Barleys series. But I always wanted to write longer books. I’ve had the idea for the Night Angels Chronicles in my head for a long time. I can’t think of anything I would rather be doing than writing in an interesting location. I’ve been fortunate to be able to write in some pretty amazing places, such as Istanbul, Turkey; Lake Arenal, Costa Rica; Martha’s Vineyard; and Ireland, to name a few.

Who are your favorite authors to read? What is your favorite genre to read. Who Inspires you in your writings?
I love all kinds of books, mystery, fantasy, science fiction, memoir. I’ve been inspired in this series by Anne Rice’s Interview With the Vampire. I mean, I love this book… a lot. And the good old-fashioned original Dracula. I wanted to create some truly evil characters and have my heroine struggle with the evil inside of her, as Anne Rice did, and I wanted to have some completely depraved and relentlessly heartless characters, like Dracula, who have horrific histories as to how they became that way. I do not sugarcoat my If I were to choose a couple of authors that greatly influenced me, it’s not easy to choose. I would have to say Jack Vance and his Planet of Adventure series. Most people don’t know about Vance, but wow, he could create worlds. I love all his books. Daphne du Maurier,you can’t get better for atmospheric mystery and romance with Rebecca, Frenchman’s Creek. Arthur Conan Doyle, all of his Sherlock Holmes series. For a modern writer, I loved The Walls Around Us, by Nova Ren Suma. One of my favorite authors is Barbara Nadel and her Inspector Ikmen series. Then there is Shantaram. Isaac Asimov is a favorite.

Tell us a little about your latest book?
Key of Mystery is the first book in the NIGHT ANGELS CHRONICLES. There are six books in the series and I have already finished the second one, Book of Angels.
Something I read from a Los Angeles Times article written in 1934 set off a spark in my imagination that led to this series. It absolutely fascinated me! Did you know that…
Beneath Los Angeles there are over 280 interconnecting tunnels…and there is a Hopi legend that they lead to an underground city, built thousands of years ago by the Lizard people to escape a rain of fire. In the 1934 a man named Schufelt convinced the Los Angeles City Council to fund his search to find the city. He was sure that somewhere hidden within was a secret chamber holding vast treasure and a tablet upon which was written the Secrets to the Origins of Life. Whoever possessed this tablet would have the knowledge and power of God. Schufelt claimed to have almost reached his destination when he inexplicably disappeared.

That led me to the idea of what might happen if the search for the tablet hadn’t ended. And I started writing this series, which is very easy to read and yet quite complex in its history and characters.

My heroine, Sera Patterson, lives in the most exclusive suburb outside of Los Angeles, Oak Haven. Her world falls apart when her father is killed in a horrific accident, far beneath the city while working on the new underground transportation system. All he leave behind is a mysterious key in a black box.

Sera places the key on a chain around her neck and vows to avenge her father. Strange characters arrive in town including the otherworldly Night Angels, who claim to be sent for her protection.

Sera falls hard for one of them—exotic, arrogant Peter. But what if his promise of love is only a ruse to gain access to the key? As Sera’s connection to the key grows, so do her supernatural powers. Guided by clues left by her father, Sera searches for the hidden chamber beneath the city, hoping to save what lies within before the sinister mayor and his deadly followers drown humanity in a bloodbath.

There are five Night Angels and they all are ancient beings with terrible histories. Fabian Gore is the elder of them all…except for Queen Ahhotep, who is being held prisoner in the Life Box in Saint Catherine’s Monastery in the Sinai Desert. I can’t really give away much more than that at this point! Once Key of Mystery has been out long enough and enough people have read it and the second book is ready to be published, I can talk more about who the Night Angels really are–and what happens between Sera and her younger brother Salem.

Key of Mystery, book I in the NIGHT ANGELS CHRONICLES, by K. H. Mezek’s Website

Key of Mystery, book I in the NIGHT ANGELS CHRONICLES, by K. H. Mezek Facebook Page