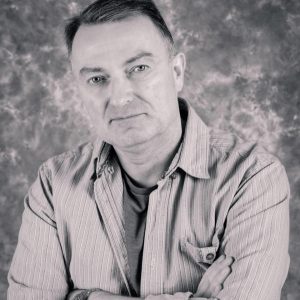 Tell us a little about yourself. Where were you raised? Where do you live now?
I was born in Northern Ireland, served in the UK’s Royal Air Force as an Intelligence Officer and then, after twenty years’ service, relocated to Western Australia. My wife and I are very lucky to live in an idyllic part of Australia’s south-west and although we don’t have pets as such, we are surrounded on a daily basis by a resident mob of Kangaroos, flocks of pelicans, parrots and cockatoos and Magnus, our very tame, wild magpie. Given those surroundings, it’s hard not to be creative.

At what age did you realize your fascination with books? When did you start writing?
I grew up in a house stuffed full of books and had parents who always encouraged my sisters and me to read. Obviously, they also encouraged us to be outside and active, but if we were reading, that was a perfectly acceptable alternative. That tolerance for, and love in, books was infectious. I suppose I didn’t really consider, like most kids, where the books came from or how they had been written, until a girl in my Primary school won a BBC writing competition. I can recall in clarity our whole class, sitting on the floor in a semicircle around the radio, listening to the wonderful diction of the announcer reading the story. I remember being so very impressed and decided I’d give it a go. From then on I produced poems and short stories. However, other than the occasional airing of some light-hearted rhymes being used at social functions, my writing stayed mostly under wraps. I suppose I always figured I might write a novel, but it wasn’t until 2009 that I seriously put effort into it. That book, ‘A Time To Every Purpose’ was released in 2014.

It is an alternative history, based on one of those fascinating “What-If” moments. Those fleeting happenstances, when a single person could have decided to go a different way and, by that single action, changed the world. Set slightly in the future, in a society dominated by a horrendous regime, it also singles out that moment when people stand up for their beliefs and by doing so, challenge the status quo. Its positive reception and equally positive reviews, gave me the confidence to move forward with the idea of a series of detective novels.

The first, ‘Face Value’, was released in May 2015 and introduced Kara Wright and Tien Tran. The story sees siblings Zoe and Michael Sterling insisting that their middle-aged parents have gone missing. Kara and Tien are at first sceptical and then quickly intrigued; the father, ex-intelligence analyst Chris Sterling, appears to be involved with an elusive Russian thug. Using less than orthodox methods and the services of ex-colleagues with highly specialised talents, Wright and Tran take on the case. But the truth they uncover is far from simple and will shake Zoe and Michael as much as it will challenge Tien and anger Kara; anger she can ill afford, for she is being hunted by others for the killing of a street predator who chose the wrong prey.

Once more the reception for the book was positive and so I wrote the latest in the series, ‘Flight Path’.

Who are your favorite authors to read? What is your favorite genre to read. Who Inspires you in your writings?
A lot of YA authors plus some of the mainstays. Tolkien, Graves, Kipling, C.S.Lewis, Carroll, Pullman, Marsden, Muchamore and of course Ms Rowling. Add to that a love of Shakespeare, a shelf full of Michael Connolly and a passion for the writing of Steven Moffat, the creator of the TV series Sherlock and the show runner of Doctor Who and much more besides. His writing is utterly mesmerizing. Given that list, I am sure you can see I don’t have a particular genre, but on balance, I guess the majority of the books on my shelves would be crime thrillers. Even my favourite Shakespeare play, Julius Cesar, has a stabbing central to the plot.

Tell us a little about your latest book?
I suppose it’s a simple case of Wright and Tran are back, although it was by far the most challenging book for me to write to date. Being the second in the series, I had to find a balance that would accommodate readers who had read the first instalment and therefore, “knew things” with those readers who knew nothing of what went before. That took quite a bit of drafting and redrafting. Thankfully, according to the initial reviews, it seems I managed to achieve the balance.

It was also the first book that I had a “clear run” at, as I decided to take time away from my “day job” to concentrate wholly on writing. Besides being a wonderfully focussed experience, it also meant the book was finished much more quickly than the two previous titles. All in all, Flight Path took me six months from start to finish, including editing and redrafts and I think it is all the better for that.

However, it still needed a plot that would grip readers, so it begins with the enigmatic Franklyn, who is introduced at the end of Face Value, contacting Kara and Tien, “to make sure the dead are really dead.” That leads to them investigating the apparent suicide of a local celebrity. A simple, straightforward case soon becomes anything but, as within days the women are embarked on a pursuit that leads halfway around the globe and into the darkest recesses of the human condition. Kara, Tien and their team endure mental stress worse than anything they experienced from combat and, like combat, not everyone makes it home.