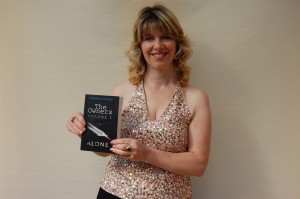 Tell us a little about yourself. Where were you raised? Where do you live now?
I was born in Glasgow but have lived in England since the age of eighteen. I have a wandering soul and would love to live in lots of different places but having children in school has tied me to one spot. My ancestry is Italian and Spanish so maybe that’s where the wander-lust comes from.

Although I have many friends my days are rather solitary and I can always be found snuggled hobbit-like on the sofa with my trusty laptop on my knees, bashing away at yet another chapter and having conversations with my characters. It can be lonely being an author but it’s a job I adore.

At what age did you realize your fascination with books? When did you start writing?
I never really thought of myself that way growing up. I think it’s different now because children have more choice over their leisure time but when I was young [oh so long ago ;)] all we could really do was play out or read and I never was much of a fan of the Scottish weather so I spent lots of time indoors reading.

I only began to seriously write a few years ago but now I have so many book ideas that I shall have to live to at least 120 to get them all written!

I write Monday to Friday, term times, when the children are in school. I know other writers write in the evenings but I am whacked by then! To be honest I am a terrible typist but I persevere. I once tried to dictate my books to the computer but because of my Scottish dialect it came out as gobbledy-gook! So now I rely on spell check and proof-readers!

Who are your favorite authors to read? What is your favorite genre to read. Who Inspires you in your writings?
I like most genres but I love science fiction, especially post-apocalyptic and dystopian novels. I will read space operas too but only if they are very character driven.

As a child I loved Dickens and Shakespeare but nowadays I read Dean Koontz or Stephen King for pleasure. As for inspiration, I think I take a little bit from them all, crazy as that seems.

What’s important for me as an author is that my readers see the characters as I do, that they see their faults and frailties – their humanity and sometimes inhumanities. For me the story is only half the goal – I want the writing to be beautiful for its own sake, so I blend style with content.

Tell us a little about your latest book?
I have just completed a YA/crossover novel which is currently with my agent. I’ll let you know how that goes.

My most recently published book is The Owners, Volume IV: A New Epoch. It was an emotionally hard book to write, as has been the two volumes which follow on from it which are not yet published.

My characters had already been through so much and there I was pushing them into more conflict; even more dangerous situations. My stomach was churning with anxiety as I wrote every word of those books! And yet it was a thrilling ride!

The Owners is an unusual series in that it starts in the very distant future with ‘The Owners, Volume I: Alone’, where humans are kept as pets by creatures called Eyons. The explanation for how this situation arose is never fully given in Volume I, however Volume II starts in our very near future and gives more, tiny little clues which are picked up and elaborated on in Volume III so that the reader gets to play detective so to speak.

Everything is there – all the answers – they just need to be discovered and I think that is partly the appeal of the series. But more than anything else its the fact that it is a really good story which keeps my readers coming back for more.