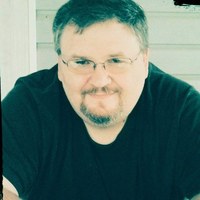 Tell us a little about yourself. Where were you raised? Where do you live now?
I’m Bobby Nash. I write novels, comic books, short stories, graphic novels, and the odd screenplay or two. I have been writing professionally since 1992, but really got busy around 2001 then busier after my first novel premiered in 2005. I am born and raised in Georgia, starting in Atlanta and moving steadily farther out from the city as I got older. I keep saying one day I’ll move to try living somewhere else, but I’ve not made the leap yet. No pets, but I have had dogs in the past.

He was named Best Author in the 2013 Pulp Ark Awards. Rick Ruby, a character co-created by Bobby and author Sean Taylor also snagged a Pulp Ark Award for Best New Pulp Character of 2013. Bobby has also been nominated for the 2014 New Pulp Awards and Pulp Factory Awards for his work. In 2015, Bobby’s novel, Alexandra Holzer’s Ghost Gal: The Wild Hunt won a Paranormal Literary Award in the 2015 Paranormal Awards.

For more information on Bobby Nash please visit him at www.bobbynash.com and across social media

At what age did you realize your fascination with books? When did you start writing?
I started reading as a kid and fell in love with comic books and paperback novels and picture books. as a teenager. I wanted to be a comic book artist, but my artistic skills are somewhat lacking. I started writing stories so I would have something to draw. Eventually, that morphed into me writing for other artists and eventually being hired to write by publishers. Then, one day I declared that I was going to write a novel. It’s been full speed ahead since then.

Who are your favorite authors to read? What is your favorite genre to read. Who Inspires you in your writings?
This could be a mighty long list. authors whose work I enjoy and who inspire me include Michael Connelly, Alex Kava, Beau Smith, Jonathan Maberry, Gail Simone, John Hartness, Ed Brubaker, and so many more. I like to read thrillers, crime, suspense, sci fi, action, adventure, pulp, generally whatever strikes my fancy at the moment.

Tell us a little about your latest book?
My most recent release is the SHERLOCK HOLMES/DOMINO LADY trade paperback collection published by Moonstone Books. Nancy Holder and I have been writing stories with Domino Lady and an elder Holmes teaming up and I was honored to add a brand new story to this collection. I love writing Domino Lady. She’s one of my favorite characters. I’ve resisted writing Sherlock Holmes in prose because I wasn’t sure I was the right writer for Holmes stories. Teaming him up with Domino Lady for an adventure helped to allay my fears a bit. Sherlock Holmes is one of those great characters that everyone knows. Writing him was a a daunting task.