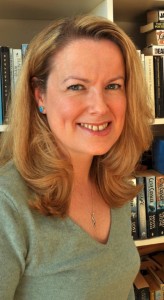 Tell us a little about yourself. Where were you raised? Where do you live now?
I’m a freelance journalist and author of seven previous books, including ‘Lost Lands, Forgotten Stories’ and ‘The Day The Island Exploded’, which is the story of my father-in-law’s real life escape from an erupting volcanic island in Antarctica, published by the award-winning children’s publisher, Barrington Stoke. I studied at both the George Washington University in Washington D.C. and also at the University of Sussex in the UK, where I gained my honors degree. Since then, I have traveled the world writing for magazines on topics ranging from wolf watching in northern Spain, to interviewing the last surviving Yaghan (canoe nomad) in Patagonia. I am now married and based in the west of England, where I work as a freelance journalist and also write adventure thrillers under the pen name A.S.Bond.

At what age did you realize your fascination with books? When did you start writing?
I started writing when I was around age 7. I’d read just about everything Enid Blyton had written (the Famous Five series being a favorite) and I started to write my own adventure story for kids. It was supposed to be a full length novel, but I think I got to around chapter 3….I started another novel at age 8, which was, bizarrely, about a canoeing expedition in Canada. This was a topic I later went on to write a book about as an adult, following my own canoe expedition in Canada. The book was a travel memoir published by HarperCollins, called ‘Lost Lands, Forgotten Stories’

Who are your favorite authors to read? What is your favorite genre to read. Who Inspires you in your writings?
Obviously, I really love adventure stories and thrillers! I also love travel books, too and I write those under another name. There are so many authors and individual books, it is difficult to pick out a few, but any Robert Goddard novel is a masterclass in plotting. I also enjoy John Grisham and Lee Child. Clive Cussler is an inspiration. My favorite travel books are probably ‘The Wild Places’ by Robert McFarlane and ‘The Curve of Time’ by M Wylie Blanchet.

Tell us a little about your latest book?
What would you do for your country? In Afghanistan, a US Army Patrol is devastated by an enemy with sophisticated weaponry, while in D.C., Pentagon staffer Scott Jenson tips off the ambitious young reporter Brooke Kinley about a billionaire businessman’s involvement in terrorism. But why is the White House determined to protect this businessman, and why does the answer seem to lie in the Canadian wilderness? In a dangerous journey to the remotest parts of the world and the darkest corners of men’s hearts, Brooke races to prevent a catastrophic attack on America, but can she uncover the real traitor?

Patriot is a pulse pounding, high octane adventure thriller with a heroine who is as happy running rapids as she is asking difficult questions at the Pentagon. ‘Patriot’ will be appreciated by fans of Clive Cussler, Robert Ludlum or Tom Clancy.

When I sat down to write ‘Patriot’, the old advice ‘write what you know’ came to mind. I realized what I knew was wilderness survival. The first in my new series of ‘Brooke Kinley Adventures’, my novel is, in part, based on my canoe expedition in a remote part of Canada, where I traveled with just a First Nations guide through some of the harshest country in North America. This award-winning canoe expedition in Labrador, later became the subject of ‘Lost Lands, Forgotten Stories; A Woman’s Journey to the Heart of Labrador’ (Eye Books HarperCollins).

My heroine, Brooke Kinley isn’t me; I wish I were like her! She’s tough, capable and not afraid of anything, which is just as well as she has to face everything from charging bears to weapons of mass destruction!.Like Brooke, however, I have lived in DC and worked as a journalist, but that’s where the similarity ends!