You are here: Home / Books To Read / Winslow: The Yet To Be Traveler 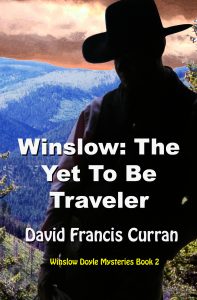 About Winslow: The Yet To Be Traveler:

When Winslow Doyle’s girlfriend Shawna Edwards and nephew Adahy Redwolf find a body during a camping trip, it sets Winslow off on a mission to discover what happened. He believes the dead young woman is someone he rescued when she was lost in the wilderness many years before. What he uncovers is a con set up by a billion-dollar defense company to save its billionaire owner from ruin.

Author Bio:
Curran moved to the wilderness in 1997 after earning an MFA in creative writing and an MA in Interpersonal Communication at the University of Montana. He moved to the wilderness of western Montana to write. Instead he spent the first four years building a log cabin because the 1910 miners cabin he first moved to was sinking.
He has lived in his wilderness cabin with his wife and editor Patricia year round ever since.
In winter they have to snowmobile 7 miles to reach their vehicle.
His many articles on writing have appeared in the Writer and Writer’s Digest.
He was a regular contributor to Louis L’Amour’s Western Magazine while that magazine was published.
He got his first big break while earning his MFA when he sold a story with co-writer David Braden to the television series WISEGUY with Ken Wahl.