You are here: Home / Books To Read / Wheels of Injustice: Saving My Child from the Child Savers by Susan Louise Gabriel 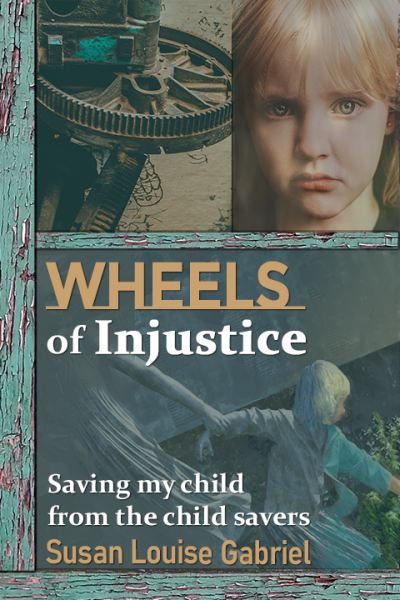 Wheels of Injustice: Saving My Child from the Child Savers by Susan Louise Gabriel

Six weeks into a blissful honeymoon, life turns into a nightmare when Susan’s 9-year-old daughter is taken away and her husband is falsely accused of child sexual abuse. As her own and other families throughout the country are crushed under its wheels, Susan musters the strength and the will to battle a behemoth system that has become the very thing it was created to eradicate.
Wheels of Injustice is the true story of one woman’s fight against a powerful system that’s run amok, grinding families into dust, obliterating Amendment protections, and taking revenge against anyone who attempts to reform it.
It’s the 1980s—a decade of unfounded abuse accusations, hysterical claims of orgies at daycare centers, families controlled by courts, and an out-of-control child protection system.
A tribute to God’s faithfulness and a message of hope to others who have struggled to overcome adversity, fight governmental intrusion and overreach, and turn an upended life the right way around again.
******
“We are not to simply bandage the wounds of victims beneath the wheels of injustice, we are to drive a spoke into the wheel itself.”
― Dietrich Bonhoeffer

Author Bio:
Susan’s goal is to inspire others to live a life that’s present and active in this world, yet shaped by forces that lie beyond it. Susan’s books and poetry illustrate her struggles and triumphs as she endeavors to walk by faith and not by sight, leaning on the Holy Spirit for guidance and inspiration in living and writing.

Susan and her husband live in the country outside a small town in Texas. They have been blessed with two children, three grandchildren, four chihuahuas, and toads too numerous to count.