You are here: Home / Books To Read / Warriors and Monks: Pons, Abbot of Cluny by Michael A. Ponzio 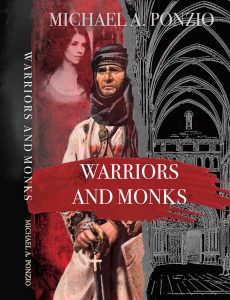 About Warriors and Monks: Pons, Abbot of Cluny by Michael A. Ponzio:

Pons, born to a noble family in the south of France in 1075, is given to the Church at the age of four. He becomes a Benedictine monk and thrives in the monastery as a devotee of the Order’s rules, working, praying, and studying.
Reaching adulthood, he falls in love with Primavera, a woman in the nearby village, but the Church’s renewed enforcement of celibacy endangers their relationship.
It is a lawless time when people of the land are threatened with violence as they cultivate their fields or travel on pilgrimage. The monks are compelled to become warriors, defending themselves with farm tools and walking staves.
Pons is elected as Abbot of Cluny Monastery. He is torn amidst his sense of duty as the powerful leader of Cluny, rivaling the Pope, his love for Primavera, and the calling to join the crusade to save Jerusalem.
The novel is number three of the Warriors and Monks Series, but each book can be read on its own.

Author Bio:
Have you ever wanted to live in another time and place in history? Have you imagined what it would be like to take the place of an ancestor? Michael A. Ponzio’s lifelong experience reading books on history combined with his love for family and travel has inspired him to bring these visions alive, by writing a series of “Ancestry Novels.”
Since childhood, Mike Ponzio has read books about ancient history. He traded books and stories with his father, Joseph E. Ponzio, and they discussed the origins of the family surname. Mike traveled around the Mediterranean to Europe, Asia, and Africa, visiting many of the locations he would later write about. He continues to travel and write Ancestry Novels which he imagines may have taken place during the lives of ancient ancestors.
Mike met his wife, Anne Davis, in 1975 at a University of Florida karate class. Since that time both have taught Cuong Nhu Martial Arts. With John Burns, they wrote and published six instructional books on martial arts weapons. Mike retired in 2015, after working as an environmental engineer for thirty-seven years. Anne and Mike have raised four sons. They are all engineer graduates, following in the footsteps of their Davis and Ponzio grandfathers.