You are here: Home / Books To Read / Trencher’s Bunker 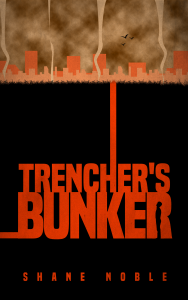 Marcus Trencher’s bunker becomes nothing short of a subterranean palace. His life underground was to be one of comfort.

Near the doomsday deadline, he sends Henry Plyman to recruit desirables to join them. Plyman believes he is filling vital roles to service a population of hundreds, if not thousands. That isn’t exactly the case.

Timothy Spencer refuses any part of Trencher’s plan, ultimately sacrificing their friendship, and his place in Trencher’s bunker.

Spencer does secure a bunker bid, but elsewhere, and nowhere near as luxurious. He mines coal and subsists on a soy-based protein drink. His wife is depressed and his children grow ill. He cannot shake the sense that Trencher has a presence in his miserable new home, and he begins to investigate.

Author Bio:
Shane Noble is from Sullivan, Indiana, and now resides in Louisville, KY. TRENCHER’S BUNKER is his debut novel. The next is on its way, and he hopes to write many more.