You are here: Home / Action & Adventure / TREEZZ by Ray Graf 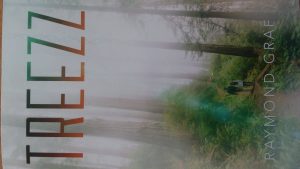 About TREEZZ by Ray Graf:

TREEZZ a fantasy/adventure novel by Ray Graf
AS the world evolved into an intelligent society so did the trees. Several elder trees joined together to form a leadership called the “TREEZZ.” The TREEZZ quickly realized that man was destroying the earths forest faster that they proliferate. And without the trees the earth would no longer exist. Humans were the problem and so it would take humans to stop the destruction. The TREEZZ enlisted the help of two very special people, the young Jerimiah Simpson and Becca Carlsbad to help them in a crusade to “Save the TREEZZ” A billionaire philanthropist found out about this plan and offered his financial resources to fund this venture. He had one request, he dreamed of finding herbal remedies to alleviate some of mankind’s common ailments and make the medication free. The man’s name was Robert McAlister. All parties agreed to the partnership and construction was started on a super hi-tech laboratory. Then they conducted a search for a team of elite biologists The team’s first discovery was a medication for diabetes. This breakthrough was touted as a sensation through-out the medical community. The philanthropist’s generosity soon turned into a nightmare as the pharmaceutical giants saw their outrageous profits dwindle. The greedy owners vowed to destroy the lab and the team. What they didn’t know the TREEZZ magical, mystical powers would thwart their efforts and save the day. As Jerimiah and Becca expeditions took them all over the world searching for the rare and elusive herbs. Along the way they encountered terrorists planning to attack the United States with a deadly virus, a South American drug cartel, a female albino legend deep in the Amazon Rain Forest and an American Indian sweat lodge ritual with mystical and magical results. Of course, there is love and romance and strange friendships. All this makes for a great read….so sit back and enjoy!!

TREEZZ by Ray Graf
I’m seventy-five years old residing in the majestic mountains of Western North Carolina with a wonderful woman. We share her beautiful chalet home, and we are both widowers.
I have a blessed life enjoying some of my passions like motorcycling and building custom motorcycles which I won several prestigious awards. I have enjoyed, sky diving, scuba diving, sculpting stone art out of coquina rock indigenous to Florida. One of my sculptures is on display Bruce Rosemeyer’s Harley Davidson dealer in Daytona Beach.
This is my first attempt at writing a book. I hope to make this story a trilogy. The second book in the series is completed and I am now working on the TREEZZ III and should have it completed in the fall. Some might ask where did I get my idea/inspiration. Every day I walk the paths of out great Nantahala forest. I admit I do talk to the trees. The first question is, “Do they talk back?” I a way they do, If you listen closely you can hear creaking and cracking of the limbs. Their branches rub together in a gentle breeze and moan. At times the wind will rustle the fronds creating a haunting melody. Yes the forest is full of sounds we just need to listen.