You are here: Home / Books To Read / Titan’s Plague: The Trial by Tom Briggs 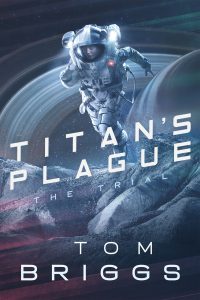 About Titan’s Plague: The Trial by Tom Briggs:

In 2168, two intelligent lifeforms exist on Titan, and only one can rule the galaxy.

Outside the rings of Saturn, Pati Lynch commanded a prison ship mining ice. Her crew mutinied, they tried to kill her, and she was the last one left standing. Now, she stands trial for their murder.

Nancy Tate, Pati’s defense attorney, thinks she’ll go free this time because the prison ship’s records were damaged or erased, and without those records, the legal decision will be based on Pati’s testimony. However, and Nancy repeats this often, she cannot state aliens had instigated the revolt. Pati knows she didn’t dream the apparition that appeared on her ship and claimed to be the ex-husband she accidentally killed, but she decides her attorney knows her business, and it’d be best to follow her directions if she doesn’t want to be sentenced to a solitary, thirty-year trip back to Earth.

Then the dreams started. They weren’t normal, even though they started in her fishing village back in Ireland. Soon, she was flying throughout the Saturnian system, and into caverns on Titan, all while in a great ecstasy. Waking up gave her a suicidal depression that took most of a morning to recover from.

The trial at least was going well, if not easy. The prosecutor dragged every proceeding to its legal limit and made only superficial attempts at settling. This while the computer judge kept lowering the guilty score in each hearing. Pati tried to be patient and took a job working outside on Titan, which nearly cost her life when her rebreather was sabotaged.

At least the dreams were a source of solace, until, she was forced to decide… And now, nowhere is safe.

Author Bio:
Tom Briggs is a retired engineer, military veteran, and lifelong devourer of science fiction novels and military history books. Writing science fiction became a passion before retirement, and he utilizes that effort to justify not searching for professional employment while still able to work. He lives in Southern Illinois with his beautiful wife and any relatives traveling through.