You are here: Home / Books To Read / Tiny Planet Filled With Liars by Stephen M.A. 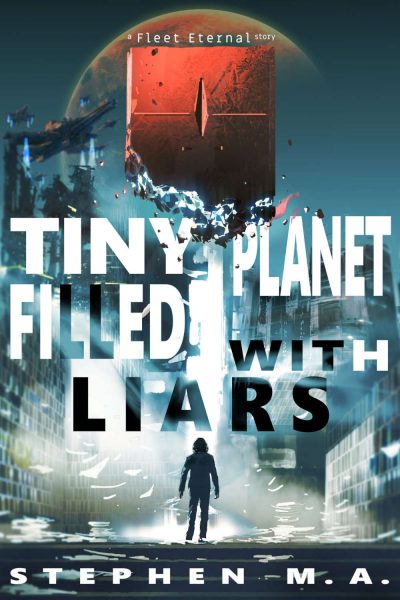 —A ruined jacket, a knife to the back, and an undying alien invasion in orbit. Mondays, right?—

The Interviewer has a grudge. A minor inquiry into misbehaving military contractors has turned into a desperate bid to save the world, and now everything hinges on truthful cooperation from corporate lords. But in the Unified Fiduciary Dominion, honesty is often illegal, and ALWAYS unprofitable.

Armed with (expensively) exclusive legal authority, this fussy ex-military investigator must unravel a string of disastrous battles before the Board can kill the story…or its tenacious writer. With the aid of Madame Zhou, cantankerous Ruby District proprietor, and Bartimus Caldwell, military sensor Scry, the outlines of a dark conspiracy begin taking shape overhead.

Someone on the Board is playing games with every life on the planet—and they’re not doing it alone. After countless interviews with Admirals, indentured service members, and even scummer plebs off the street, the final verdict feels tantalizingly close… But when the Defense Corps orders all personnel to close ranks and shut up, the only choice is to turn the entire world into amateur sleuths instead.

Now, in a last-ditch attempt to solicit information from the public, The Interviewer will blow the lid off this criminal mystery with a declassified evidence report that rocks the Dominion to its core—and shifts the course of corporate history forever.

_____
Every 30 days, Fleet Eternal blinks into orbit, surrounding the planet to lay siege. The enemy is tireless—its armaments unbeatable, its numbers uncountable. But the terrifying assault has one slight flaw: Full retreat is triggered by even the smallest casualty rate, if you kill them fast enough…

Author Bio:
Stephen M.A. is a first-generation tribal descendant originating from a reservation in big sky country. He now lives and writes in the Northeastern United States.