You are here: Home / Books To Read / The Verses Versus Empire Collection 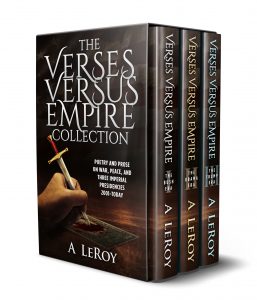 About The Verses Versus Empire Collection:

Ever since Cain murdered Abel, the blood of innocents has cried to Heaven for justice, and never more eloquently than this!

“Through three imperial presidencies
The poet cries, voice in the wilderness,
Reed swaying in the wind, a bruisèd reed,
His motion stirred to music,
Daring to see and state the obvious,
Decry hypocrisy, prophetically to see
Not just the future but the now,
The awful now and make some sense of it,
The world a stage on which plays out
Congressional pantomime, a knot
Unable to untie itself. The blood
Of innocents cry out to Heaven where
These incensed lines as incense burn
With hate of Hate and hope of Hope.”

Created over 20 years, this three-volume work of unprecedented literary power overthrows the lies and blasphemies of three imperial presidencies under Bush, Obama, and Trump. Then ushers in a new awakened era with the dawn of Covid, echoing the abolitionist role of plague in the time of Moses.

You will find no resort to outdated ‘left-wing’ or ‘right-wing’ proclamation here, no flag-waving for Democrat or Republican, but a blazing fire of prophetic utterance exposing a litany of hypocrisy and fraud in our corridors of power—whether in Washington, London, Moscow, or Brasilia. Meanwhile, the author cheers on fellow prophets of our age, among them whistleblowers, prisoners of conscience, and investigative journalists.

That he does so not just in prose but poetry, raises this collection to the status of Homerian epic or Dante’s Divine Comedy. “Prose can make its fine arguments to the mind,” he writes in the Introduction, “but the mind is not ready to receive them unless poetry has first lifted the veil and inclined the heart to fall in love with truth.”

But LeRoy is not your typical fire-and-brimstone prophet. He also finds ample opportunity for satirical humor, even as he brings each White-House occupant in turn before the throne of God, whether to receive mercy or judgment. And his short stories are a delight.

All this is supported by a wealth of deeply researched historical record, including thoroughly documented footnotes and links to source material, as well as free links to the author’s own narrations.

Progressive forces will find herein a rousing call to courage and clarity at this critical time for planet and peoples. Never was divine fire more poetically expressed!

“A brave new presence in the politics of the globe.”
San Francisco Review of Books

“Abdiel LeRoy’s poetry and prose offer intellectual nourishment for critical thinkers and seekers of truth… I highly recommend this book and its companion editions to anyone who seeks to escape from the ‘Matrix’.”
Annemarie M. Osborne

“So well done. A remarkable command of the language and great sensitivity. And doing all this in an entirely new way, wading into (almost) unexplored literary territory.”
Claude Forthomme

“If you wanted to extend the critical view of American political history into the present beyond Gore Vidal’s ‘Biography of the United States of America,’ these books would be the ticket… A joy to read and an invitation to keep your eyes open as to what is really going on.”
Rogier F. van Vlissingen

Author Bio:
A former journalist, broadcaster, and financial analyst, Abdiel LeRoy’s titles include Bible-inspired fiction, non-fiction, epic poetry, poetry, and memoir. He first began writing political poetry when the U.S. Supreme Court installed George W. Bush in the White House in 2001 and has continued ever since, culminating in the three-volume, thousand-page VERSUS VERSUS EMPIRE collection, written over 20 years and covering in turn three imperial presidencies.

Several more collections, along with two epic poems, a few novellas, and three Bible-inspired works of self-help, are why the San Francisco Review of Books marvels at the “giant tasks” this author takes on!

Gifted with powerful voice, Abdiel also turns many of his works into audiobooks, drawing on an extensive background as actor, narrator, and voice actor, and inhabits a rich array of characters. He has memorized thousands of lines of poetry, especially Shakespeare, and will quote you some on whatever topic you choose! All in all, he is quite the renaissance man, excelling in yoga, Argentine Tango, and competitive swimming.