You are here: Home / Books To Read / The Ugly Princess: The Legend of the Winnowwood by Henderson Smith 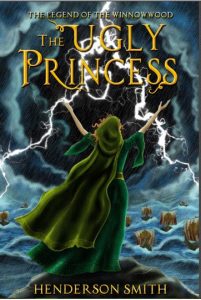 About The Ugly Princess: The Legend of the Winnowwood by Henderson Smith

In a world obsessed with beauty, whether women wanting it or men seeking it, come meet a new kind of princess – a princess who is kind and brave and magical, but is not beautiful. She’s not even pretty. Actually, she’s rather ugly, but she knows who she is and she is powerful, fierce and amazing, for Princess Olive is the last of the Winnowwood, a magical race of women with dominion over nature. Even though her father, the king, despises her and is embarrassed by her appearance, Olive remains true to herself. When her father is captured by a rival kingdom, Olive attempts to free him, but his capture is just the beginning of a far wider plot against their kingdom. Olive unravels the plot and in the process is betrayed by her father’s ally and is imprisoned until a mysterious highwayman rescues her. Will she be able to stop the plot against her kingdom? With the help of the highwayman and a legion of animals, Olive constructs her plan and risks everything to save her kingdom.

Based on the award-winning screenplay of the same name, The Ugly Princess will take you on an amazing adventure filled with twists, turns and an ending that will take your breath away because it is also a love story of the most unusual, magical kind.

Buy the book, and follow the author on social media:
Get This Young Adult Book From Amazon.
Visit the Author’s Facebook Fan Page.

Author Bio:
I grew up as a military brat who travelled the world with my family. We moved 10 times before I was 12. Given that transient life style, I had very few friends and I was quite shy. It always took some time to warm up to new surroundings and by the time I did, we were off to our next assignment. Books became my best friends and I lost myself to them. The wonderful adventures and magical realms of possibility were so appealing to my quiet existence. I really became a fan of fairy tales; I think most little girls do. It’s fun to think of yourself as having magical powers and living a magical life. As time went on, however, I became a bit disillusioned with fairy tales as all of the princesses who were the stars of the story were beautiful. I was not beautiful. Did that mean I was not entitled to have these amazing adventures because I did not have the right face? It always troubled me. As an adult, I finally wrote the fairy tale that I wanted to see: a magical princess who was brave and kind and amazing and smart, but not beautiful. In fact, she is rather ugly. But this ugly princess is the most amazing heroine and the one I had always wanted to read about. Now, you can. I hope you love the amazing Olive and the bravest princess whose heart is far more beautiful than anyone else’s face.