You are here: Home / Books To Read / The Spirit in the Crypt (Jonny Roberts Series Book 1) 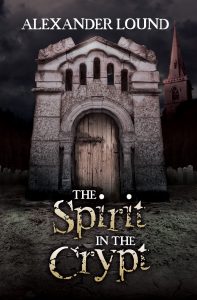 About The Spirit in the Crypt (Jonny Roberts Series Book 1):

Ever wondered what it feels like to speak to the dead?

When fifteen-year-old Jonny Roberts goes out with his friends on a summer night, he doesn’t expect to be forced to enter a crypt. To look at skeletons decaying in their graves.

To hear the voice, screaming at him. Screaming into his mind. Commanding him to leave.

For weeks afterwards, he is filled with dread, terror as to what the voice might have belonged to. A demon? A ghost? In his nightmares, skeletons strangle him. And when they clear, he has the mysterious nightmare of the girl from his school, making the long walk across the graveyard, and disappearing into the crypt. Never leaving before his waking.

It’s when something awful happens to this girl that his fear turns to panic. Panic which will force him to unravel the mystery of the crypt, and in doing so, many mysteries about himself.

Author Bio:
Alexander Lound is a writer of YA fiction from Kent, UK.

He first fell in love with writing when he was a young boy: in primary school, he used to keep a ream of unfinished stories in his under-desk tray, complete with pictures (though he has never been a great illustrator).

After becoming an English teacher, he decided to start writing for the audience that he teaches, and for anybody else who loves the supernatural, horror, or YA fiction.