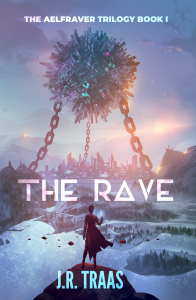 About The Rave by J.R. Traas:

“Time, it stretched before her, every second crawling by, lengthening like an uncurling worm. Alina absorbed it all in painful detail: the twinkles of firelight caught in the breastplates and gauntlets of the Chimaera Guard, the panic in Cho’s eyes, the spittle glistening on Mezami’s fangs, every growl and sputter of all their raised voices.”

The Aelfraver Trilogy, set in J.R. Traas’s futuristic fantasy world of El, is a story about teenage rebellion—against the ruling elite and their gods.

GO HOME, ALINA
When Alina K’vich lost her parents, her grandfather Dimas gave her a home and a purpose. At The School, he trained her to become an Aelfraver—a hunter of arcane beasts, demons, and other anti-human entities. For ten years, they built a life together. Then, one night, in the middle of preparing dinner, Dimas vanished.

Now seventeen, and stuck with her grandfather’s debts, Alina resorts to illegal Raves in her rundown hometown. But these small-time contracts simply aren’t enough: The School lies in disrepair, the power’s shut off, and the bills remain insurmountable. In a last-ditch gamble, she signs up for a Rave whose massive reward could rewrite her entire future. However, she’s far from the only Aelfraver to answer the call of such an alluring bounty…

Out of options, Alina sinks the last of her money into a forged Raver’s license and a one-way ticket to New El, the floating Capital. There, an unnamable horror—her target—busies itself slaughtering the nobility in the dead of night, leaving no survivors and no witnesses. Protected only by her wits and spells, Alina must find a way to save New El, her School, and herself.

Author Bio:
J.R. Traas is an author, editor, and tutor who has published over twenty books, as well as various short stories and poems.

With well over a decade of teaching experience, it has been his privilege to instruct dozens upon dozens of young people in a plethora of subjects. Some of his students have won awards and scholarships for their writing. One of them calls him “Gandalf”—the highest compliment he has ever received.

Gandalf lives near Atlanta with his wife and their animal friends.

Heading over to Blankbooklibrary.com is the simplest way to reach him and, if desired, join the conversation. If you liked this story, please leave a review and spread the word. Cat food, after all, doesn’t grow on trees.