You are here: Home / Action & Adventure / The Old Gods of Desolation by A. L. Plumb 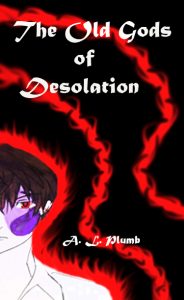 About The Old Gods of Desolation by A. L. Plumb:

The story is set before Earth earned it’s name, back when it was filled with gods, monsters, and creatures of nightmares. The creation of humanity was meant to be a positive thing, but it ended up causing a civil amongst the gods, one side wanting to protect their creation, and the other wanting things to go back to the way they were before, when gods were the undisputed rulers. The gods protecting humanity proved far too strong for their opponents, so their opposition decided they needed a weapon. They create a demon who is more powerful than anything that has ever been created before, only they rushed his creation a bit too much and he ended up being just a really nice guy who loves everyone. The story follows the demon, Aangshin, as both sides try to push him against the other, neither truly understanding how deadly he can become if pushed too far…

Author Bio:
My introduction to writing was rather sudden. I often have odd dreams and nightmares, but one in particular made me thing “I could make good horror films out of this stuff”. I don’t have the knowledge or skills for film making, so I turned to writing instead and instantly fell in love with it. I started out by practicing with short stories and managed to make a 40k word book by linking a few together and altering them to make them into a coherent storyline. The Old Gods of Desolation is my first attempt at a full length book and is in essence a test to see if people will like the madness in my mind. If all goes well, I hope to recreate my short story book into a full length series of at least 4/5 books, along with making more books based on ideas that I have, such as an alternate view of mental health to help people sympathise with those who struggle.