You are here: Home / Books To Read / The Navigator 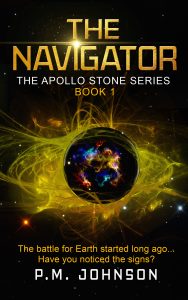 EARTH HAS CHANGED. The old world order collapsed following the meteor impacts of 2031 when fire rained down from the skies, instantly vaporizing millions. Billions more died during the Long Winter and resource wars that followed.

Over one hundred years have passed since those devastating events and new societies have formed around the globe. In North America, the fragile peace that exists among the continent’s independent nations and city-states is under threat. The ambitious Grand Guardian of the People’s Republic of America is mobilizing his massive war machine in order to make real his dream of reunifying a former great power.

But on the eve of the offensive, a leading scientist dies under mysterious circumstances, though not before he entrusts another with the key to unlocking a secret. A secret so powerful, it could not only unravel the Grand Guardian’s designs, but also doom, or save, all of humanity.

Book 2, The Warrior, and Book 3, The Renegade, also available.

Author Bio:
I was born and raised in a small town along the banks of the Mississippi River. I now live in northern Virginia with my wife and two children. Growing up in a small town was a tremendous boon because it provided me with good friends and plenty of space to just be a kid (something that is increasingly rare as the world gets smaller and life gets faster). When I wasn’t on the river or exploring the surrounding wooded bluffs, I loved reading books. I wasn’t picky about the genre as long as the story was good. I gobbled up history, fantasy, fiction, science fiction, the classics, poetry, and drama. Soon I was seeing the world through the eyes of Richard Francis Burton, JRR Tolkien, Frank Herbert, Hemingway, Homer, Robert Service, and Shakespeare. And what a remarkable world it is!

I eventually went on to college, law school, and business school, collecting diplomas along the way. I worked in major book store and department store buying offices for quite a while before turning, grudgingly, to the practice of law when the forces of competition led to the demise of the enterprises for which I had toiled. Eventually, I acquired a position developing policy, and for the last decade I have been happily churning out memoranda, assessments, analysis and other forms of guidance. And let us not forget emails. Oh, epic the emails I have written!

Despite these engaging careers as buyer, attorney, and policy analyst, there is an itch none of these occupations could scratch. I am speaking, of course, of story telling (although I must admit that during my short stint practicing law, I did spin a few yarns).

And so it was that one summer night in 2015 as my wife and I were sitting on the back deck, which I built with my own four hands, I announced to her my idea for a science fiction adventure story. She said it sounded good, but it was too big for one book and would have to be a trilogy. I didn’t believe her at first, but as I waded into the story, the pages kept adding up and it soon became clear that she was right. So a trilogy it would be. Indeed, it became a four book series when I was forced to split book three, The Renegade, into two books because it had grown into into an 800 page tome.

Since embarking on this madman’s quest to go from authoring zero books to writing a four book leviathan, I have learned a great deal about myself and the challenges (and rewards) of writing. I’ve also developed a great appreciation for the masters of the craft and aspire each day to offer stories that will both entertain and edify my readers.