You are here: Home / Books To Read / The Law of Capture 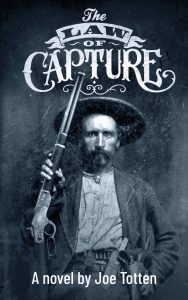 About The Law of Capture:

The Law of Capture is the unforgettable story of the multiple lives of Edward Valentine. Soon after the Civil War, sixteen-year old Edward Valentine rides out from the family farm to seek adventure in Texas. He is little prepared for the lawlessness and savagery that will transform him from reckless young outlaw to seasoned lawman to hired assassin. After escaping from a Texas chain gang, Valentine flees to the Wyoming Territory, only to find himself in the middle of a violent range war. Forced to decide between following the law or living outside it, Valentine manages to do both. While serving as county sheriff, Valentine operates covertly as a hired assassin for the territory’s landed elite. Can Valentine navigate his dangerous double life and manage to stay alive? Told from the first-person perspective of several remarkable characters, this compelling debut novel is set against the casual violence and brutal landscapes of the West. The Law of Capture reveals the passions and animosities that churn just beneath the surface of the American soul.

Author Bio:
I’ve been a writer for more than twenty years. During my career, I’ve helped create advertising campaigns for some of the tech industry’s most, well-known brands, including: Intel, Microsoft and Verizon. My work has won numerous awards for creative excellence, including: Communications Arts, The One Show and The Addy’s.
In 2016, I won the Utah Original Writing Competition for my short story, The Starling Killers. In 2019, I was awarded first place by the League of Utah Writers for my story, Reserved Seats for Armageddon. This year I was shortlisted in the UK for The Wilbur Smith Adventure Writing Prize for my novel, The Law of Capture.