You are here: Home / Books To Read / The Latitude by Pete Clements 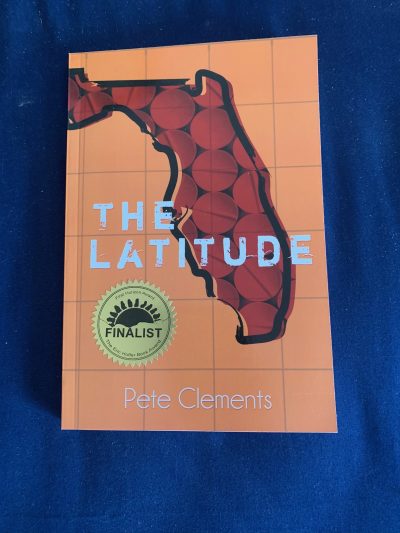 The Latitude by Pete Clements

The Latitude by Pete Clements, A synopsis
I am pleased to present my debut romance/thriller novel, THE LATITUDE, published by Black Rose Writing of Texas, the 2020 Eric Hoffer International Literary Book Awards Honoree Finalist, having finished in the top10 % of all fiction entries.
This is a Florida based, timely story involving illegal airborne illicit opioid trafficking into the Central Florida Citrus Belt. Antagonists land their small planes in the citrus groves under the cover of darkness, commandeer farm and ranch homes, outbuildings and barns, groves and grazing lands, and bring social and economic havoc, bribery, bankruptcy and terror to the rural community.
This special area of Florida, a hundred miles either side of Latitude 27.5 North, has long been called, “Where The Tropics Begin” because the climate here, depending on season, is uniquely both Temperate and Tropic, bringing out incomparable color in the former and sweetness in the latter; throughout the agricultural world renowned, therefore, as the finest place on the planet to grow citrus. The local citrus farmer can’t just pick up and move any distance and still produce the citrus industry’s standard of quality. The land is, to the farmer, invaluable, now faced with terminal calamity.
Young locals fight back. The four protagonists, unique in that they could never have even met, so disparate are their backgrounds, geographically, educationally, economically, socially and culturally. They chase the criminals by small boat across the Gulf Stream to Bahamas hideouts, suffer gunfire on the high seas, even endure a well-defined hurricane. In the end, beautiful young love is born, proof, at least this once, that opposites attract.
A Review The Latitude by Pete Clements is a timely new thriller that will captivate readers with compelling characters, ruthless airborne opioid smugglers, thrilling high seas boat chases, torrid romance and a killer Bahamian hurricane. The fast paced action goes from Palm Beaches’ historic Breakers Hotel to secluded Florida citrus groves and ranch land, to a Gulf Stream crossing to the Bahama Bank and back in Pete Clements exciting debut work. Fiction enthusiasts will be hooked on this finely tuned expertly crafted South Florida adventure novel. The Latitude delivers.
Terry L. Howard
Author

THE LATITUDE is at all major bookstores, and is available in both paper-print and ebook online at Amazon, Barnes & Noble, AppleBooks and Kindle.
The national opioid epidemic roars on, death by overdose up 30% over the past year.
Who wins in the end? In THE LATITUDE, you do.

Buy the book, and follow the author on social media:
Get This Fiction Book From Amazon.

About The Author
Pete Clements, University of Michigan, A.B. in English/Creative Writing, started as a TV Advertising copywriter, then group creative director, at major AAAA advertising agencies, winning 23 national and international trade awards, including Cannes Film Festival, and finally writer/director/producer in documentary, corporate and sports films and active member, the Directors Guild of America. As writer/co-director, his Indianapolis 500 Motor Car Race corporate documentary film, “The Eddie Sachs Story”, for Marathon Oil Company, was named by the Indianapolis Motor Speedway Foundation “the definitive remark on the philosophy of motor car racing,” and was placed in the Indie 500 Museum, Speedway, Indiana.

In 1970, a radical change; Pete moved to Vero Beach, Florida, founded what became a successful retail marine business, was a member of Southern Yacht Brokers’ Association, and wrote and published local newspaper columns and magazine articles.

Growing up on the Great Lakes, Pete became an expert sailor, is a graduate of The Sea School Of The Sea, held a USCG Captain License, Ocean Master, Power and Sail, was a sailing instructor, Stuart, Florida, at The Chapman School of Seamanship and was recently the proud owner of the 42’ aux. ketch, “Pendancing”, cruising the Atlantic Seaboard, Maine to the Bahamas.

He was is a Past Director, Vero Beach Rotary, Past President, The Hundred Club of Indian River County, former member Riomar Bay Yacht Club and a USAFR Veteran.

By the early 1990’s, Pete was a full time novelist. His first novel won the Florida Space Coast Writers’ Guild and Brevard College sponsored 1996 Florida Writers’ Conference, First Place for unpublished long fiction. May 18, 2020, his newly released romance thriller, The Latitude, was named a Finalist Honoree in the 2020 Eric Hoffer International Literary Book Awards, having placed in the top10% of all nominees. The Latitude, published by Black Rose Writing of Texas, continues on “The Best Seller List” at the local Vero Beach Book Center, is available at all bookstores and online venues, print and ebook, including Amazon, Barnes & Noble, Apple Books and others. He continues to make his home in Vero Beach, Florida and is writing a new Florida-based novel.