You are here: Home / Action & Adventure / THE LATE MR. CARY A 1920s Mystery by Michael Campeta 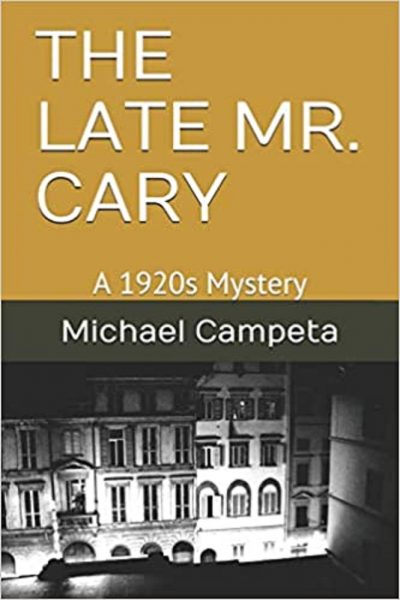 THE LATE MR. CARY A 1920s Mystery by Michael Campeta

THE LATE MR. CARY by Michael Campeta
Of all times to travel to upstate New York, Megan Cary told herself as she hurried into Grand Central Station, it was at the height of a blizzard.
It is January 1928. Megan Cary, a young and stylish librarian, is on her way to the state library conference. On the train, Meg meets Janet Faraday who confides that she killed her son’s father six years earlier—and got away with it.
With her marriage crumbling, Meg can no longer tolerate her husband Adam’s moodiness and philandering. She harbored thoughts of divorce but murder?
During a family visit, Adam mysteriously dies. Meg finds a suicide note and the police want to quickly close the case. So does Adam’s mother Helen, the stern matriarch of the family. Skeptical that Adam would kill himself, Meg hires a private detective whose investigation ultimately unravels family secrets as a series of surprising deaths occur over two cold and snowy weeks in Albany.
Janet falls under a trolley and is killed. Yet a witness claims she saw someone push Janet to her death. Then comes the abrupt death of Helen’s maid. Soon after, a neighborhood busybody, who was present at the time of Adam’s death, falls down her cellar stairs and dies. Meg wonders if these deaths could somehow be related.
THE LATE MR. CARY is a classic mystery set in the stately home of an upper crust family in the 1920s, bringing the 1920s to life—amidst a parade of death!

Buy the book, and follow the author on social media:
Get This Action & Adventure Book From Amazon.

Author Bio:
I am a librarian and teacher from upstate New York. I am a native of Albany and decided to set my novel in the New York State capital. I enjoy history and am especially interested in the 1920s, a fascinating period in American history. I enjoy mysteries, classic mysteries, classic literature and travel. I am interested in the daily life of the 1920s, including transportation, flappers, Prohibition and the role of women. Like many cities during this period, Albany saw a surge in crime during Prohibition. I am intrigued by the effects of crime on the families of the victims and their reactions to it.