You are here: Home / Books To Read / The Invisible Chains – Part 1: Bonds of Hate by Andrew Ashling 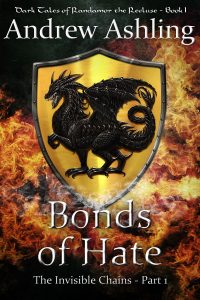 About The Invisible Chains – Part 1: Bonds of Hate by Andrew Ashling

An epic fantasy story in an alternative historical medieval setting, packed with action and adventure, politics and intrigue, but also friendship, love and romance.

He is a prince of the Royal House of Ximerion, a fiercely competitive dynasty. He is only sixteen years old when his father, the high king, gives him and his older half-brother — and rival for the succession — a prestigious title with no substance. While their father and older brothers confront a major power in the south, the young princes are packed off to defend the northern borders against raids by barbarian tribes.

The army they were given by their father is far too small to defend the Northern Marches, not to mention that the experienced general — and friend of their father — who leads the army doesn’t seem all that eager to fight. Neither are the northern lords or the local population interested in defending themselves. And money is scarce… The half-brother princes begin to suspect they were set up for failure by their own father.

Then the unthinkable happens, and the youngest prince finds himself a captive, all alone, without friends, in a faraway region and surrounded by enemies, among which foremost his own family. If he wants to survive he needs to grow up fast.

Warning: the protagonists of this novel are gay and there are explicit scenes of man on man action. This dark fantasy also features some cruel events, none of them gratuitous, but some readers may find them too hard.

Author Bio:
I have no great literary ambitions. I just tell stories, and I try to do it as good as I can, hoping other people will enjoy reading them.
Most of them have explicit scenes in them, often of a rather kinky nature. But they’re only the raisins in the cake, because I actually love telling stories. That means there always is a plot, or, more often, several plots.
I love exploring what makes people tick, what makes them do the often quirky things they do. Also, I enjoy playing with expectations, boundaries, taboos even.