You are here: Home / Books To Read / The House of Tomorrow by Adair Arlen 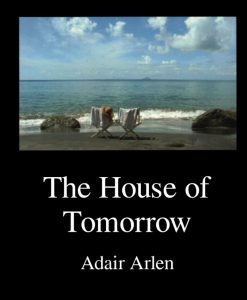 The House of Tomorrow by Adair Arlen

The House of Tomorrow
A solitary man, Paul Gregory is the mysterious owner of trendy nightspot, Pal’s, in the Southern Illinois University town of Carbondale.
Liliane Greening, a researcher at the university, is putting her life back together after an emotionally crippling marriage.
When eligible bachelor Professor Sam Meredith pursues and courts Lily, he succeeds in breaking the hearts of many local hopefuls. Lily believes her dreams are finally coming true when Sam proposes marriage, which means also that she will become the mistress of renowned Meredith Manor, something she assures herself means nothing to her. Most important, in her eyes, is her love for Sam.
Enigmatic Paul Gregory increasingly appears in Lily’s life. Apprehensive at first, but reassured by his courtliness as well as intrigued by his dangerous reputation, she gradually grows to count him as a friend and eventually considers him her sometime guardian angel.
In an emotional scene, Paul reluctantly confesses that he is working undercover for the DEA and suspects the Meredith family of money laundering, dealing in drugs and worse. Lily is shocked and believes Paul is intentionally trying to prevent her marriage. Sam is fatally shot by his wicked sister (accidentally?) at Meredith Manor. Distraught, Lily wrongly blames Paul for indirectly causing the tragedy and retreats into a shell of her former self.
Time passes and Paul and Lily happen to meet again. He confesses that he’s always loved her and she finally realizes that he’s the man she’s been looking for all her life. Until the very last minute they both fear their happiness will be snatched away.
This is essentially the tale of a man and a woman who have learned to expect nothing and who nevertheless strive for and at last achieve the ultimate prize – requited love.

Author Bio:
Born and raised in Chicago, Adair had a happy but unremarkable childhood, ever trying for school grades good enough so she could go unnoticed. Teachers remarked on her report cards that she was too shy. That was then. She now loves to ham it up on stage. Go figure.

Adair lives on the ruggedly beautiful West Indian island of Montserrat with her English husband and their series of Westies and island dogs. An English major, Adair attended Blackburn College and Southern Illinois University, followed by evening classes at the Chicago campuses of Loyola University, the University of Chicago, DePaul University and later Tulane University in New Orleans.

Never unemployed, Adair considers her more than five year stint in the Advertising Department of Playboy magazine’s Chicago home office as one of her more interesting jobs; she always had too much to do and was never bored. Before leaving Playboy, she managed the business office of the Chicago Playboy Mansion.

Another favorite job was at Southern Illinois University in the Department of Graphics and Publications where she worked with writers and editors, artists and designers. She also owned and managed a secretarial service across Lake Pontchartrain on New Orleans’ north shore.

Adair was inspired to write by her engineer husband, who built her a studio for that purpose. “So what else could I do but start writing? I finally ran out of excuses not to.” And so Paul Gregory, the saloon-owning private eye was created. There are now four books in the series and the fifth is a work in progress.

Adair feels fortunate to have a studio where she can paint as well as an office where she writes. She observes, “We live in a place where even the most mundane task can be performed in a setting of breathtaking beauty. We’re surrounded by the magnificence of the Caribbean at cliff’s edge, islands in the distance, mountains as a backdrop and flowering trees and gardens everywhere in between. The air we breathe is clean and fresh and our water is pure and delicious. Life is good.”