You are here: Home / Books To Read / The First Universe in Flames Trilogy (Books 1 to 3): Earth – Last Sanctuary, Fury to the Stars & Destination Oblivion (UiF Space Opera) by Christian Kallias 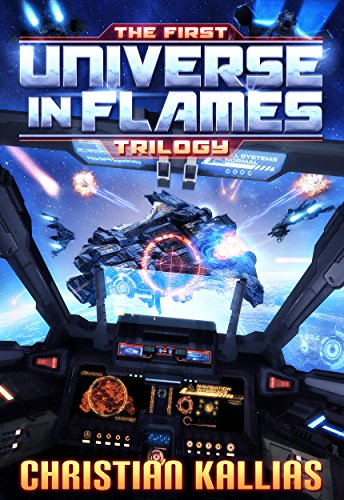 I am Fury. Evil has followed me to Earth. I shall Protect this World until my Dying Breath.

When the Obsidian Empire obliterates the Star Alliance with the help of the Zarlacks, an old evil race long thought extinct, the universe is set ablaze. The last survivors are forced to make a blind jump beyond the outer reach of the charted universe, to a world teeming with life: Earth. The fleet’s arrival inadvertently alerts the enemies to the presence of sentient life in that part of space, resulting in a swift and devastating invasion of the blue marble.

Under the guidance of the Olympian goddess of Love, Aphroditis, Lieutenant Chase Athanatos learns of his origins and must race against time in a daring attempt to save Earth, their Last Sanctuary.

With Earth now thrown at the center of the conflict, the newly formed Earth Alliance struggles to keep the enemy at bay. Desperately outnumbered, Chase and his friends must wage one battle after another while seeking new allies to survive.
When it becomes clear that his Fury powers are awakening in him, Chase must face his inner demons and learn to control them or he could very well destroy the universe he has sworn to protect. Can his Fury heritage and unwavering determination hold the key to change the course of everyone’s destiny?

Author Bio:
Aided by an abundance of Sci-Fi characters with supernatural powers, Bestselling Sci-Fi author Christian Kallias has a secret. He lives two lives. One in the real world and one inside his own creations, in worlds where he can lay down the foundation of his universes for both his and your enjoyment. Guess which world he prefers?

Christian Kallias is the bestselling author of the award-winning Universe in Flames Space Opera series.