You are here: Home / Books To Read / THE FINISHER 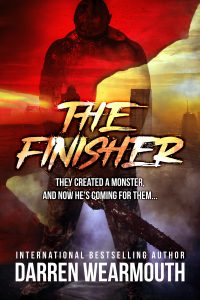 A coordinated attack across the planet plunges civilization into an apocalypse. A former solider’s wife is gunned down in front of him. With his life and the world in ruins, he sets out on an unrelenting revenge mission.

Author Bio:
Darren Wearmouth’s first novel was the best-selling FIRST ACTIVATION that he later sold to Amazon’s publishing imprint, 47North in a two-book deal. THE INVASION TRILOGY and SIXTH CYCLE have subsequently also been Amazon best-sellers. His next three releases were the international bestselling AWAKENED trilogy novels, published by Harper Voyager in collaboration with James Murray of Impractical Jokers. The latest novel is DON’T MOVE, again with James, published by Blackstone.