You are here: Home / Books To Read / THE EYES OF DEATH by Donald L. Vasicek 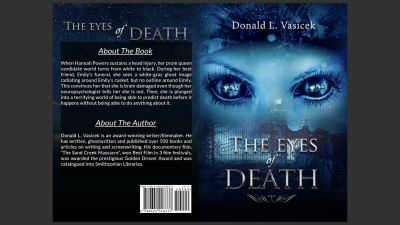 THE EYES OF DEATH by Donald L. Vasicek

The Eyes of Death concerns psychic powers, which, probably, most people in the world believe to be real, although most people in the West think of as imaginary. Therefore, it could be classed as either Non-Fiction-Body Mind and spirit or Fiction-Fantasy. However, The Eyes of Death is a novella written in the third-person singular, the main character of which is Hannah Powers, who lives in the ‘preppy-type’ city of Evanston north of Chicago.

The general atmosphere of the novel is tense, as if something is always just about to happen. And it does too, an early example of which is an armed robbery on a small shop and the tragic consequences of it. Hannah also becomes aware of her psychic powers but is to some extent confused and disappointed by them, because she cannot help the people who are the subject of her Second Sight.
In fact, she begins to think that she must be mentally ill, or at least, mentally damaged, but there is no medical evidence for this. Hannah seems to find her new life with psychic powers both frightening, lonely and very sad, because she can do nothing to help the people, whose future she has foreseen.
In the end, it’s either her sanity or acceptance of her psychic power and live with the fact she can do nothing about saving people’s lives. She has to choose.

Author Bio:
Don is the founder and owner of Olympus Films+, LLC, a global writing, filmmaking and consulting company, in business since 1993.

Don studied producing, directing and line producing at the Hollywood Film Institute and at Robert Redford’s Sundance Institute. He studied screenwriting at The Complete Screenplay, Inc., with Sally Merlin (”White Squall”, “Short Circuit”), as his mentor.

Don has acted in 20th Century Fox’s “Die Hard with a Vengeance”, NBC’s Mystery of “Flight 1501″, ABC’s “Father Dowling”, and Angel Street Films LLC’s “Running Horses.”
These activities have resulted in Don’s involvement in over 100 movies during the past 25 years, from major studios to independent films.