You are here: Home / Books To Read / The Dragon Stone Conspiracy: A Strowlers Novel 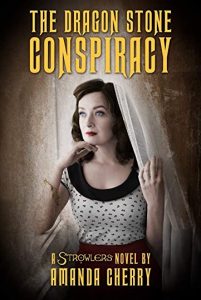 About The Dragon Stone Conspiracy: A Strowlers Novel:

When the Fäe go to war with a Nazi cult, one woman will protect humanity’s future.

As World War II rages, accidental immortal Pepper Elizabeth Jones is on the run from government agents on both sides of the Atlantic. Hidden in neutral Ireland, she is summoned to meet with a mysterious general, The Righ, who tasks her to save magic itself from the Nazis. Now, she must race against the clock to stop an evil ritual and prevent the Nazis from gaining a world-shattering supernatural power.

Pepper Jones and the Dragon’s Stone is part of the Strowlers Shared Cinematic Universe, a collaborative global story that anyone can join.

Tell your story. Change the world.

Author Bio:
Amanda Cherry is an author/actor who still can’t believe people will pay her to write books. She enjoys documentary films, fried food, and spending time on her boat. In her spare time, Amanda volunteers as an announcer and referee for Flat Track Roller Derby. She can be regularly found geeking out on Twitter and once upon a time enjoyed appearing at SciFi/Fantasy and Comic Conventions. Amanda lives in the Seattle area with her husband, son, and the world’s cutest puggle. She is represented by Claire Draper of the Bent Agency.