You are here: Home / Books To Read / The Diplomat of Florence by Anthony R Wildman 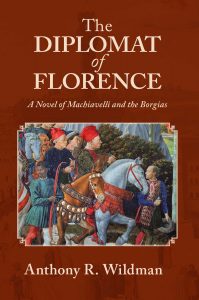 About The Diplomat of Florence by Anthony R Wildman:

Florence, 1498. The long rule of the Medici is over and a new regime has emerged from the turbulence, a genuine republic of the people. But Florence is weak and threatened by a new warlord who is rampaging across central Italy—Cesare Borgia.

Niccolò Machiavelli is young and inexperienced when he becomes second secretary of the Florentine chancellery, but he is destined to become his city’s leading diplomat. As he tries to counter the Borgia threat, Machiavelli is plunged into the grim realities of power politics, negotiates with kings and popes, and learns that no one can be trusted.

In the tradition of Hilary Mantel, this is the story of a skilled diplomat whose name has become a byword for treachery and double dealing.

Author Bio:
Born in Hertfordshire, England, Anthony R Wildman migrated to Australia with his family in 1967. He grew up and was educated in South Australia, where he acquired a degree in history and politics from the University of Adelaide, which was the start of a lifelong fascination with both subjects.

After a career in business that saw him working in the oil industry, banking and finance, business services and management consulting, Anthony has embarked on a new phase of his life as a writer and novelist.

Though his long-term home is in Melbourne, Australia, he has journeyed extensively throughout Europe, Asia and America, satisfying his love of travel and new experiences.