You are here: Home / Action & Adventure / The Chaos of Chinatown by Carey Lewis 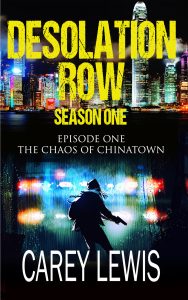 The Chaos of Chinatown by Carey Lewis

Cooper Holden scrambles for his life when an undercover operation goes wrong. Alone and desperate, he does the only thing he can – infiltrate the stronghold of another criminal empire.

This simple decision to keep himself alive will have more consequences than anyone thought possible. With the downfall of two rival gangs, a new breed of criminal enters the fray, turning the city into a kill-zone.

The Chaos of Chinatown is the first episode in the exciting Desolation Row series.

Desolation Row is told as a serial. Think of each book as an episode in your favorite Netflix series, coming together in a season finale.

Author Bio:
Carey Lewis traded a mundane job in Toronto, Canada, in favor of a backpacker life of nomadic travel. He can be spotted with his beautiful fiance somewhere in Southeast Asia, drinking coffee and scribbling furiously into a notepad while cursing his credit card debt and writing about bad guys that are cooler than he’ll ever be.