You are here: Home / Books To Read / The Cause of Darkness– A Story of the Civil War by John W. Bebout 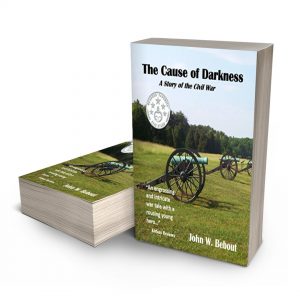 The Cause of Darkness– A Story of the Civil War by John W. Bebout

“I felt this was one of the best historical fiction stories I have ever read with exceedingly high tension as well as low points all mixed with dramatic twists and turns which produced a cornucopia of emotions.” –Bruce Miller, Team Golfwell, member Independent Book Publishers Association

‘The Cause of Darkness’ blends history with fiction and encompasses a tragic time during the Civil War that residents of the Shenandoah Valley in Virginia still call to this day ‘the burning.’ It tells the story of a 16 year-old boy named Teddy Miller who comes of age during this brutal time. Teddy’s single-minded quest to save his father from execution as a spy reads like a grand adventure, full of gun fights, horse chases and 19th century justice. There is even a beautiful Pinkerton detective who plays a major role in Teddy’s exploits. But nearly all the adult characters act solely in their own self-interest and few have Teddy’s welfare at heart. Teddy takes actions to save his father which have consequences that he cannot fully comprehend; and it is the consequences of these actions that drive the novel to its conclusion.

Author Bio:
John W. Bebout is a poet who has been published in such literary magazines as ‘The Esthetic Apostle,’ ‘The Paragon Press’ and ‘Horseshoes & Hand Grenades,’ among others. ‘The Cause of Darkness’ is his first novel and, always a poet, he has started each chapter of the book with original prose or quotes, which give the book a lyrical quality rarely found in historical fiction.

In a former life, Bebout was a scientist who authored/coauthored more than two-dozen juried, technical articles. Bebout has lived in Virginia for more than 30 years. It is, he says, “A place where romance and adventure are as pervasive as honeysuckle growing on a fence line.”