You are here: Home / Books To Read / The Bad Games Series: Books 1-3 by Jeff Menapace 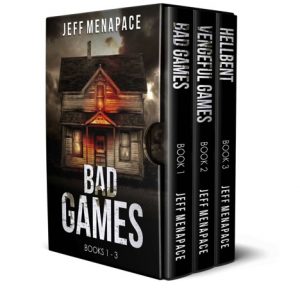 BAD GAMES – The terrifying bestseller that started it all. The Lambert Family is heading to Crescent Lake, a rural cabin community in western Pennsylvania, for an idyllic weekend getaway. Some fishing, some barbecue, some games…

The Fannelli brothers are heading to Crescent Lake too. Some stalking, some kidnapping, some murder, definitely some games…though not necessarily the type of games the Lamberts had in mind. But it doesn’t matter. The Lamberts are going to play whether they like it or not.

However, the game is far from over. There are some new players in town. Players who have close ties to the Fannelli brothers. Players who are taking things very personally…and promising results that are very deadly.

BAD GAMES: HELLBENT – A year has passed. Marine and security specialist Domino Taylor shadows the Lambert family, the guilt he feels for the tragic events that unfolded in western Pennsylvania haunting him without mercy.

When someone from Domino’s past contacts him, begging for his help, Domino reluctantly agrees, not knowing the sinister truth lying in wait: there is one final game yet to play.

BONUS CONTENT – Never-before-published Bad Games prequel short stories “Get Off My Ass” and “Job Interview.” Plus an in-depth Q & A with author Jeff Menapace about the first three Bad Gamesbooks and beyond.

Author Bio:
A native of the Philadelphia area, Jeff has published multiple works in both fiction and non-fiction. In 2011 he was the recipient of the Red Adept Reviews Indie Award for Horror.

In March 2014, his novel BAD GAMES was the #1 Kindle bestseller in Psychological Thrillers and Suspense Horror.

Free time for Jeff is spent watching horror movies, The Three Stooges, and mixed martial arts. He loves steak and more steak, thinks the original 1974 Texas Chainsaw Massacre is the greatest movie ever, wants to pet a lion some day, and hates spiders.