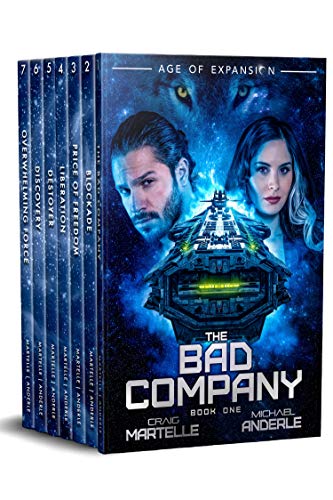 Humanity’s greatest export—Justice.
Space is a dangerous place, even for the wary, especially for the unprepared. The aliens have no idea.

Colonel Terry Henry Walton takes his warriors into battle, for a price, in this first installment of The Bad Company. He believes in the moral high ground and is happy getting paid for his role in securing it.

Set in the Kurtherian Gambit Universe, Terry, Char, and their people—humans, Werewolves, Weretigers, and Vampires—form the core of the Bad Company’s Direct Action Branch, a private conflict solution enterprise.

Join them as they fight their way across Tissikinnon Four where none of the warring parties were what they expected.

When the Bad Company learns of a human colony blockaded by aliens, they take the upgraded War Axe into battle. Once again, nothing is as it seems, but this time, they find a single enemy, evil to its core.

Ending that threat is a cause they are willing to die for. What would you do?

On Earth, parents told stories about the devil to frighten children. But devils exist and from time to time, they find their way here.

Terry and Char, take the Bad Company’s Direct Action Branch into combat to rid a world beyond the borders of a new incursion. All it will cost is the inhabitants’ most advanced technology, a miniaturized power supply that will revolutionize the Etheric Federation.

Nathan wants it, badly enough that he’s made the mission non-negotiable. Terry’s hands are tied as he takes the team into the hot zone.

Join Terry and Char as the War Axe delivers the team to a planet well outside of Federation space where they have to convince the local aliens that the Bad Company is from the government and they’re there to help.

Join the Bad Company as they fight an enemy from their worst nightmares.

This is the final series with Terry and Char as main characters. If you haven’t followed Terry and Char’s adventures, you can start here, or you can go all the way back to when they first met in Nomad Found, Book 1 of the Terry Henry Walton Chronicles.

Go forth and conquer, just like Terry and Char.

*NOTE: If cursing is a problem, then this might not be for you.

Author Bio:
Craig Martelle grew up in Iowa, joined the Marine Corps and got to see the best and the worst that the world had to offer. Then earned a law degree. No matter where he went, he always had a book with him. He loves the works of Robert Heinlein, Anne McCaffrey, JRR Tolkien, Robert E. Howard, and so many more. He has been compared to Andre Norton and is humbled by that because she was an incredible author with a huge list of novels to her credit. With every new book, Craig aspires to live up to those authors the readers have compared him to. Through a bizarre series of events, Craig ended up in Fairbanks, Alaska. He never expected to retire to a place where golf courses are only open for four months out of the year. But “it’s all part of the give and take of life.”