You are here: Home / Books To Read / Suicide: A Mother’s Journey Through Her Child’s Pain by Melanie Balestra 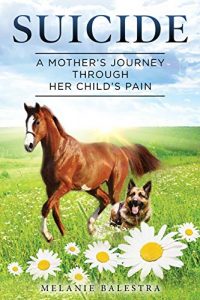 Suicide: A Mother’s Journey Through Her Child’s Pain by Melanie Balestra

This book is about the insights of a mother after her daughter dies by suicide. The mother thought her daughter Leah was painfully shy at a young age but consistently was told by counselors that her daughter would grow out of it. However, this shyness was a sign of depression at a young age. Leah was a child in a dysfunctional marriage with no love or recognition from her Dad. Her mother believed the only way to help her was to move and leave the marriage multiple times without success. After Leah’s death, her mother finds diaries that Leah wrote at various times in her life. It is only at this time that Leah’s mother realizes how much alone Leah felt and how she suffered emotionally during most of her life. Leah portrayed one life to others but had no self-esteem or respect for herself. Her lack of belief in herself led to her untimely death by suicide. The book discusses the coping mechanisms that Leah’s mother used after her death and how f faith helped her realize that God always has a purpose and Leah would one her to go on. The goal of this book is through the insight into Leah’s feelings and actions, help parents and others realize signs and symptoms in their child or others of mental illness. Parents do not have to feel alone when working with a child or other person that is mentally ill. There are more and more resources to reach out to in mental health if you believe your child is mentally ill. Start looking when you first have a suspicion. Don’t ever give up. Survival through faith in God is possible.

Buy the book, and follow the author on social media:
Get This Non Fiction Book From Amazon.

Author Bio:
Melanie is a pediatric nurse practitioner and attorney living in Southern California. She first noticed that her daughter Leah was extremely shy and withdrawn at the age of 3. She tried taking her daughter to Pediatricians, Psychologists, Social Workers and Psychiatrists who told her not to worry, that her daughter would be fine. Leah’s problems continued after she became an adult and ended in suicide at the age of 37.