You are here: Home / Books To Read / Subsumption: A Sci-Fi Novel to Inspire 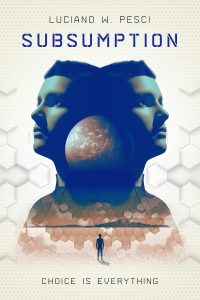 About Subsumption: A Sci-Fi Novel to Inspire:

Trusting an alien is hard … figuring out which alien is trustworthy might be impossible.

Marcus carries the weight of the cosmos on his shoulders. Still, he loves being one of the chosen enrolled in the alien-driven education tract at his university.

This extraterrestrial Federation always said he was important, so they’re taking the next logical step by inviting him to join their mysterious research Cohort.

If he survives selection, Marcus will solidify himself as one of the elites tasked with preparing humanity to face an alien Confederation bent on enslaving Earth. The simulated realities he experiences during this Subsumption research creates critical data the Federation needs to understand human nature, choice, and to integrate worlds.

But the alien experimentation proves more physically, mentally, and emotionally taxing than Marcus ever imagined, pushing him to the breaking point.

As the doomsday clock continues its countdown to the Confederation’s invasion, Marcus is running out of time to get his personal life in order.

Can he live up to his family’s idea of always moving forward? Or will he sink humanity’s chance to reach the stars? Either way, Marcus is learning what the Federation already knows: the ability to choose is the most powerful force in the universe.

If the conspiracy theories are right, though, he might be aligning with the wrong aliens.

He’s the proud father of four spirited boys, loves cooking with his wife, Nicole, and wandering Utah’s wilderness with his chocolate lab named Kitty. In his free time, Luciano enjoys reading about history and society as inspiration for his science fiction series.

Luciano is also the founder and CEO of Emperitas, a business intelligence solution that combines data science with agile research and economic modeling. He holds a PhD and an MA in Economics, an HBA in History, and a BS in Political Science.