You are here: Home / Books To Read / Stripper – A Natalie McMasters Novel by Thomas A. Burns, Jr. 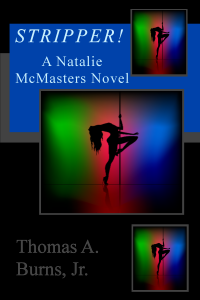 Stripper – A Natalie McMasters Novel by Thomas A. Burns, Jr.

Natalie McMasters is twenty, short and blonde (OK, it’s bleached!), way cute, and a pre-law student at State. She’s also straight, or at least she thinks so. To put herself through school, she’s moonlighting as a private detective trainee at her uncle Amos Murdoch’s 3M Detective Agency, where the most exciting thing she does is sit in a car. After she directly confronts a subject on a stakeout, Amos fires her for taking too many chances. Then she meets another student who bears an uncanny resemblance to her, and everything in her life changes.
When her new best friend is brutally murdered and Amos is critically injured, Nattie immerses herself in the seamy world of web cams and strip clubs to hunt the killer. Her investigation forces her to reassess many of the ideas that she’s lived by her whole life and do things she’s never considered before – strip on a stage, question her sexuality, and rediscover the meaning of love itself.
Nattie eventually exposes a drug ring, police corruption, and an assassin-for-hire online. Then she stumbles upon the true face of evil, and her encounter does not leave her unscathed…

Author Bio:
Thomas A. Burns, Jr. is the author of the Natalie McMasters Mysteries. He was born and grew up in New Jersey, attended Xavier High School in Manhattan, earned B.S degrees in Zoology and Microbiology at Michigan State University and a M.S. in Microbiology at North Carolina State University. He currently resides in Wendell, North Carolina. As a kid, Tom started reading mysteries with the Hardy Boys, Ken Holt and Rick Brant, and graduated to the classic stories by authors such as A. Conan Doyle, Dorothy Sayers, John Dickson Carr, Erle Stanley Gardner and Rex Stout, to name a few. Tom has written fiction as a hobby all of his life, starting with Man from U.N.C.L.E. stories in marble-backed
copybooks in grade school. He built a career as technical, science and medical writer and editor for nearly thirty years in industry and government. Now that he’s truly on his own as a novelist, he’s excited to publish his own mystery series, as well as to contribute stories about his second most favorite detective to the MX anthology of New Sherlock Holmes Stories.