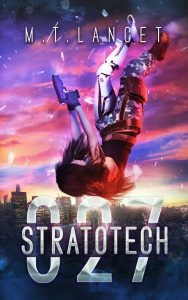 Rexala has wanted one thing her whole life: to know how her father died. The details surrounding his death are a military secret. Since the communists won World War Three, the Alliance has kept a lot of secrets. And she’s about to become part of one.

When she is taken to a training facility in the upper atmosphere, Rex discovers she is an Airborne Elite Asset – a cyborg enhanced to survive at high altitudes. She and her fellow recruits are part of a high-tech military experiment that will overthrow the oppressive communist State. With the State having destroyed the internet and now controlling all other technology, this is the Alliance’s last shot at restoring world freedom.

But Rex has her own goal. If she becomes the best fighter in training, she will receive alpha status and gain access to all military information the Alliance holds, including the details of her father’s death. Training will test more than physical fighting ability, however. It will make her fight parts of herself that have been pushed down by abuse and survivor instincts: the ability to trust, to work with others, and even to love. The fact that those around her are involved in sinister plots, determined to win the alpha position, makes that a difficult task.

If she makes it to alpha, she and her team will embark on a covert mission to strike the most dangerous terrorist group in the world. The survival of the free world will be in her hands. But it will all be worth it to find out how her father died.

The first installment in the 027 series, this fast-paced, apocalyptic military sci fi with cyberpunk and dystopian themes will thrill fans of S.J. Kincaid, K.A. Riley, and Ramona Finn.

Author Bio:
Mariel Teresa Lancet is a young author with a passion for all things bold and creative. She sees everything through the lens of artistry and loves to study and to craft stories with a perfect balance of action, plot twists, internal conflict, and compelling themes. Strong female heroines are her favorites to write; but she’s also a sucker for the “bad boy with a heart of gold.” She enjoys other forms of artistry as well, including art, fashion design, dance, and music. At a party, she’d be at the karaoke mic having a blast. Despite her fun-loving personality, Mariel struggles with PTSD and is determined to bring the reality of the human experience into her novels to increase awareness for those struggling. Her debut novel, “Stratotech 027,” is the first in a series that she writes to heal herself as much as her readers. Mariel lives in the Woodlands, Texas, where she plots her character’s next adventures behind her computer while at the local Starbucks.