You are here: Home / Books To Read / Steeped in Suspicion by Eryn Scott 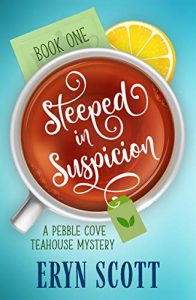 Steeped in Suspicion by Eryn Scott

When Rosemary Woodmere inherits her estranged grandmother’s Victorian teahouse, she doesn’t expect to also inherit a ghost named Asher from the 1920s.

On top of that, she finds out her grandma was murdered. When another body washes up on the beach, Rosemary knows she’ll have to find the truth before someone else ends up dead.

Buy the book, and follow the author on social media:
Get This Mystery Book From Amazon.
Visit the Author’s Facebook Fan Page.

Author Bio:
Eryn Scott is the author of heartwarming cozy mysteries and quirky women’s fiction. Her novels feature close friendships and strong families because those are the most important things in her life — a little humor doesn’t hurt either.

She calls the Pacific Northwest home and doesn’t plan on changing that anytime soon. Eryn loves to hike, horseback ride, knit, ski, and read. She believes musicals are the greatest thing since lattes, even though she’s not particularly good at singing or dancing — hey, a girl can dream, right?

Her first cozy mystery series, Pepper Brooks, is based on some of the greats in classic literature. Each book features a different author from Shakespeare to Austen. Eryn’s newest series is set in a little town called Stoneybrook. The Stoneybrook Mysteries follow local jam-maker Hadley James as she solves mysteries in her town’s year-round farmers market. From deceased knitters to sabotaged florists, these crafty citizens keep Hadley and her twin brother, a deputy sheriff, on their toes. Look for more books in these two series throughout 2020. She also has a brand new series releasing this spring and summer. Look for more information about the Pebble Cove Teahouse Mysteries on her site.