You are here: Home / Books To Read / Starburst Book 1 Women of the Grey 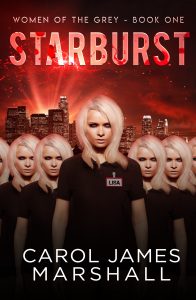 About Starburst Book 1 Women of the Grey:

Some secrets aren’t meant to be kept.
Lisa has lived her life following orders from her leader Superior Mother. She followed the rules because she was taught to. She behaved because it was expected of her. She was a good girl because she thought it was the right thing to do, till it wasn’t.
When Lisa is given her first mission in the outside world surrounded by humans, she questions everything she’s ever known, including herself.
Is Lisa human? Is she an alien? She needs the truth and will do whatever it takes to get it.
Read Starburst book 1 in the Women of the Grey trilogy and follow Lisa as she fights for the truth and becomes her own hero.

Author Bio:
Carol James Marshall is an author who likes to explore the subgenres of horror. Her works include a blend of humor, paranormal, science fiction, and thriller horror. Marshall also has published a memoir of her days bartending in the middle of nowhere California.
Marshall’s work includes 6 novels, 4 short stories. In 2020 Marshall will release a dystopian horror thriller titled Garden along with starting the Santa Muerte, Bruja series: a Latino inspired witchy horror series.
When Marshall is not reading, writing, or listening to a book, she works as a translator. Originally from Los Angeles, California Marshall now lives in Warner Robins with her husband and two children.