You are here: Home / Books To Read / Stageline: The Complete Series by Tony Masero 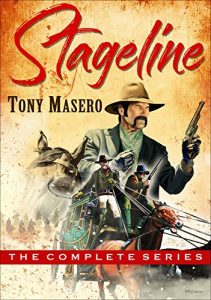 This is the story of Whip Roundel, driver of the Hostrum and Hayes stagecoach, as it leaves its depot and heads out into this troubled land with only a single guard on top and a precious cargo of five passengers inside. Whip is a haunted Reins-man, handy with a whip and backed by a history full of anomalies, now he faces the challenge of a desperate journey that will bring back bad memories.

Cosum Beech, the lone shotgun guard, has been riding shotgun and conductor with Whip for the past two years. Life hasn’t always been simple for Cosum and it’s about to get more complicated.
There may be a Civil War going on back east but far from the front down in Arizona and New Mexico Territory the stage still runs on time, wending its way through a rough country without law and order and beset by the threat of rapacious bandits and Indians left free to run wild. Even whilst the region is contested by military elements of both North and South, with so many away fighting the war it remains ripe pickings and a killing ground for those predators waiting on the sidelines.
Stageline: The Complete Series includes: The Whip, Riding Guard, Bold Deceiver, Arrowpoint, Dead On Time.

Author Bio:
Tony Masero grew up in a deprived and grey post-war London where the only relief from bomb craters and food rationing were colorful Western books and movies. The pictures on the screen displayed wide sunlit spaces, glorious forests, breathtaking mountain ranges and most importantly adventure and a great sense of freedom. His love of that early thrill has subsequently inspired many of his own books. Living far from the Wild West and any kind of armed culture he made up for it by practicing longbow archery in the forests of southern England.

At the age of three Tony Masero’s father, a renowned woodcarver, placed a pencil in his hand, an act that resulted in a later career as a Designer and then Illustrator. Working in the international advertising and publishing world Tony Masero produced a great deal of art for book covers and through the research involved in their creation is where his interest in writing began.

Research is important in his own books and many of his tales are based around some historical incident or characters that truly existed. From there the imagination takes flight and for a person with a visual frame of mind his books are often imbued with a natural pictorial quality and full of human characteristics that are true to us whatever our origins.