You are here: Home / Books To Read / Some Laneys Died by Brooke Skipstone 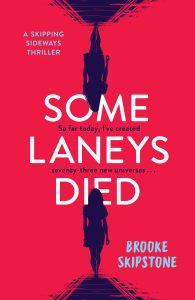 Some Laneys Died by Brooke Skipstone

Laney’s world collapsed when she caught her dad cheating. He begged her not to tell, but she did. Her family fell apart and regret consumes her, especially when she learns every decision she makes spawns a new universe for the opposite choice.

If only she could skip sideways to the Laney who didn’t tell.

But her only escape is through her imagination, until a news story blurs the lines between worlds. Two girls were murdered at the same time and same place as her father’s adulterous act. Strange events lead Laney to believe their bones are connected to her and the sister she always wanted.

Laney now has another decision to make. Some Laneys say yes, while others say no; some live and some die.

And some skip between worlds.

Buy the book, and follow the author on social media:
Learn more about the writer. Visit the Author’s Website.
Get This Thriller Book From Amazon.

Author Bio:
Brooke Skipstone is a multi-award winning author who lives in Alaska where she watches the mountains change colors with the seasons from her balcony. Where she feels the constant rush toward winter as the sunlight wanes for six months of the year, seven minutes each day, bringing crushing cold that lingers even as the sun climbs again. Where the burst of life during summer is urgent under twenty-four-hour daylight, lush and decadent. Where fish swim hundreds of miles up rivers past bear claws and nets and wheels and lines of rubber-clad combat fishers, arriving humped and ragged, dying as they spawn. Where danger from the land and its animals exhilarates the senses, forcing her to appreciate the difference between life and death. Where the edge between is sometimes too alluring.

Some Laneys Died is her second novel. Her first was Someone To Kiss My Scars, also available in French (Embrasser Mes Blessures) and Spanish (Alguien Que Bese Mis Heridas).