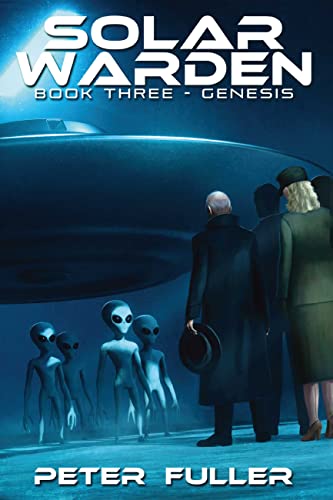 Just when you thought there was a light at the end of the tunnel …
Think again.

A ticking time bomb, an enemy that will stop at nothing, untested technology and a spy who targets Solar Warden in a way they never imagined. Earth faces unprecedented dangers and challenges as the reptilians and grays change their tactics and up the ante to a threat level never before experienced.
Newly promoted Lieutenant Colonel Sandy Richardson harbors a dark secret Scarecrow is intent on discovering. Meanwhile, the Solar Warden team is hoping the detection of a damaged enemy vessel will lead them to the source of recent, lethal attacks. The discovery of alien intel points the humans to a surprise none expected, while the entire Solar Warden team is left reeling at the sudden death of a beloved comrade.
Book Three continues Peter Fuller’s Solar Warden saga with alien wolf packs harassing the human fleet with deadly results. Scarecrow and his comrades retaliate as they discover the true nature of their enemy. There will be no capitulation, no treaty, no quarter. Evil has taken a new form …

Award winning author Peter Fuller worked in the Military History Department of the Glenbow Museum in Calgary, Alberta, Canada for eight years. He has studied military history for decades. Over the years, he’s written numerous articles and lectured at major museums and universities on the subject of military history. He has also been a regular panelist at NORWESCON since 2017.
Mr. Fuller has studied the UFO phenomenon since grade school. He is a member of the Mutual UFO Network (MUFON) and has had a few “close encounters” of his own. He recently interviewed the son of a US military officer about his late father’s work on several special access projects for the secret space program.