You are here: Home / Books To Read / Smoldering Betrayal by James Rada, Jr. 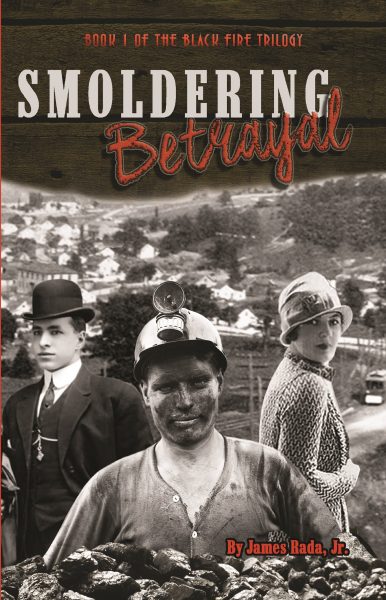 Matt Ansaro returns to his hometown of Eckhart Mines in the Western Maryland coal fields. It has been five years since Matt was here, and he swore when he left in 1917 that he would never return. Although Matt’s parents are dead, the rest of his family welcomes him home with open arms.

Joseph McCord, the superintendent of the Consolidation Coal Mines and a classmate of Matt’s, is not so happy to see Matt return. He has plans for Matt’s old girlfriend, Laura Spencer, and Joseph thinks he will need to compete with Matt for her attention.

Matt has his own plans. He is a Pinkerton detective, and he has been sent to spy on his former neighbors for the Consolidation Coal Company. The coal company owners want to know about union activity in the town and shut it down before it can gain a foothold.

Matt takes a job in the mines and works to re-establish his connections with his family and neighbors, including Laura. He also finds himself attracted to Samantha Havencroft, a suffragette and daughter of a college president.

Matt is walking a tightrope. If the miners find out he is a detective, he could be attacked and driven from town. However, if the coal company or Pinkerton Agency discovers Matt’s real reason for returning to Eckhart Mines, the result could be just as bad. He is a man alone, trying to do what he sees best, even as a national coal strike looms.

Author Bio:
James Rada, Jr. is an Amazon.com bestselling author of non-fiction history and historical fiction. His books include the historical novels Canawlers, October Mourning, Between Rail and River and The Rain Man. His non-fiction books are Battlefield Angels: The Daughters of Charity Work as Civil War Nurses and Looking Back: True Stories of Mountain Maryland.